For the first time, scientists with the National Oceanic and Atmospheric Administration (NOAA) have formally identified a new species of undersea creature based solely on high-definition video footage captured at the bottom of the ocean. And what an undersea creature it is. Meet Duobrachium sparksae – a strange, gelatinous species of ctenophore, encountered by the remotely operated vehicle (ROV) Deep Discoverer during a dive off the coast of Puerto Rico.

2. No poaching occurring within most Channel Islands marine protected areas 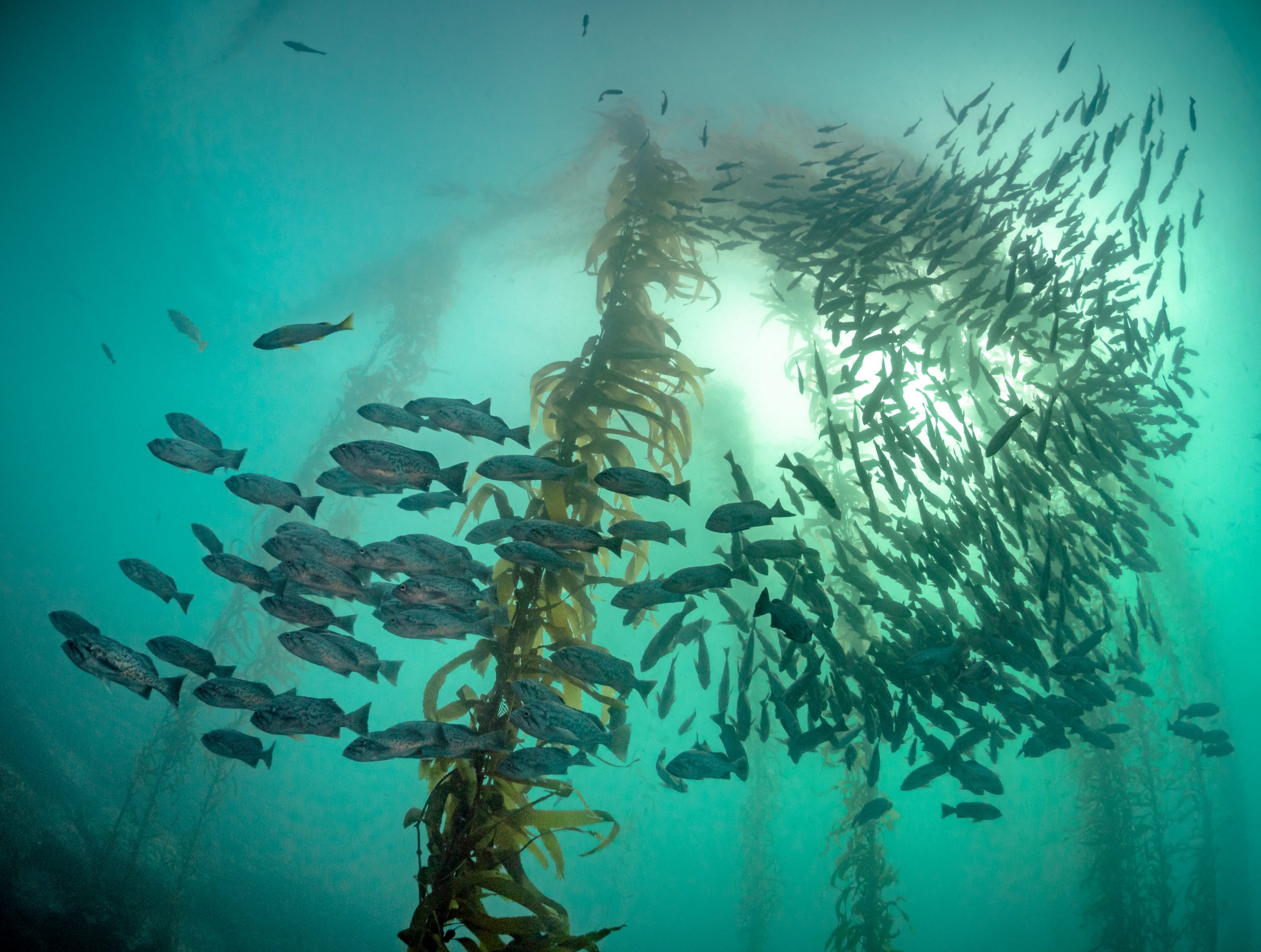 Fish are thriving and poachers are staying out of marine protected areas around California’s Channel Islands, a new population analysis by an Oregon State University researcher shows. The analysis estimates fish populations and harvest rates based on the numbers of larger, older fish present; fewer larger fish is an indication of higher harvesting rates. Researchers found harvest rates essentially at zero for four species of kelp forest fish inside the marine protected areas between 2003 and 2017, but found much higher rates of harvesting at unprotected sites nearby. 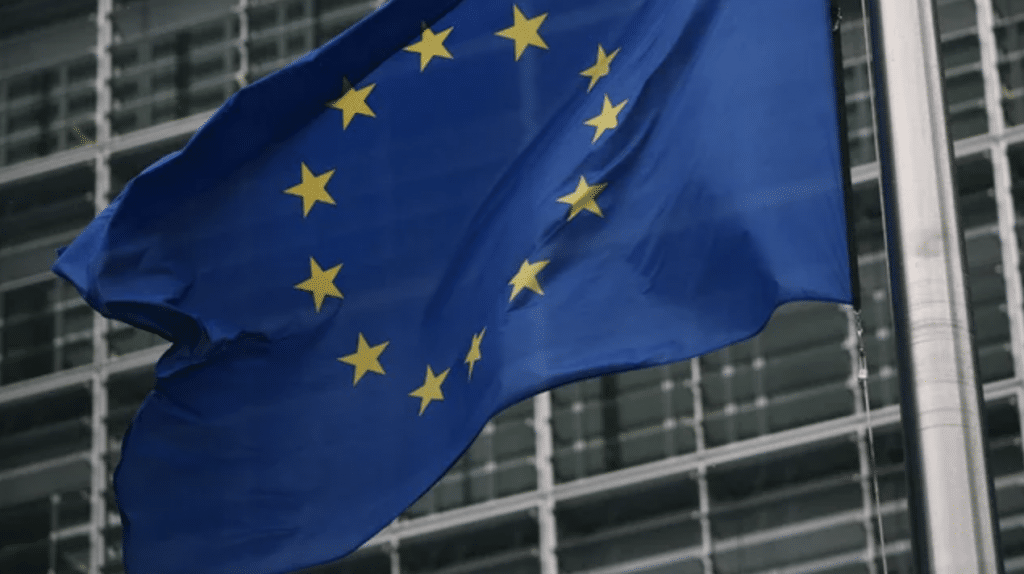 European Union (EU) nations’ greenhouse gas emissions for 2019 were down 24 percent compared to the group of countries’ 1990 emissions levels, according to a new report. The report from the European Commission, the EU’s executive branch, also said emissions had dropped by 3.7 percent compared to 2018 and were at their lowest level since 1990. Emissions are expected to drop even further in 2020 due to the economic slowdown linked to the coronavirus pandemic. The EU’s drop for 2019 was greater than the U.S.’s, which a preliminary analysis from January showed was about 2.1 percent.

A joint U.S.-European satellite built to monitor global sea levels lifted off on a SpaceX Falcon 9 rocket from Space Launch Complex 4E at Vandenberg Air Force Base in California Saturday, Nov. 21, at 9:17 a.m. PST (12:17 p.m. EST). About the size of a small pickup truck, Sentinel-6 Michael Freilich will extend a nearly 30-year continuous dataset on sea level collected by an ongoing collaboration of U.S. and European satellites while enhancing weather forecasts and providing detailed information on large-scale ocean currents to support ship navigation near coastlines. 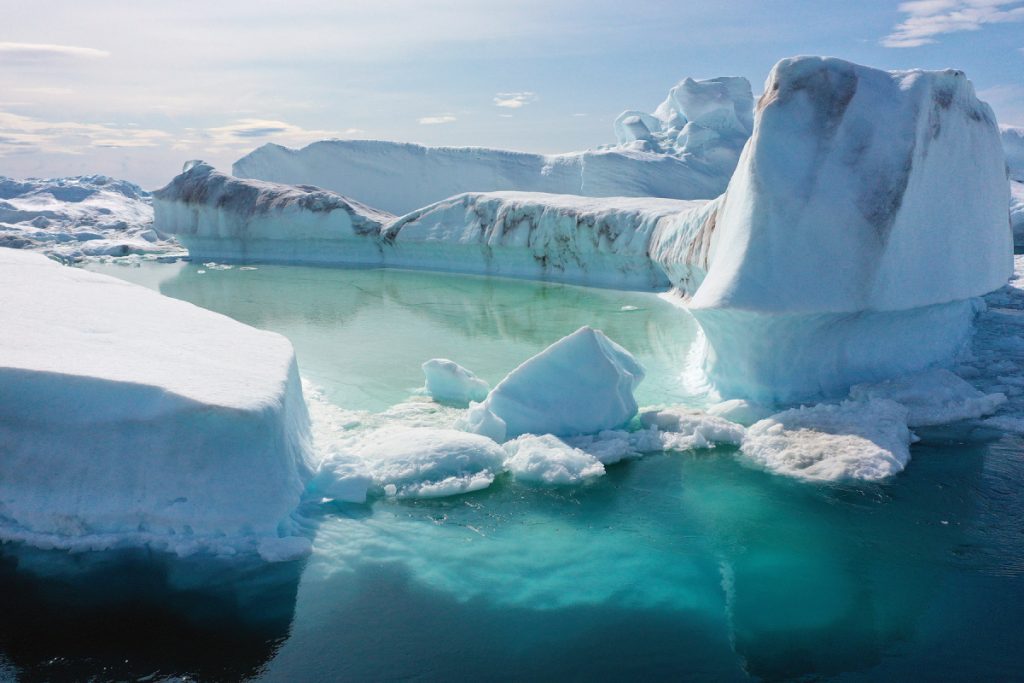 In a study published this week in The Cryosphere, researchers from the National Centre for Atmospheric Science and University of Reading demonstrate how climate change could lead to irreversible sea-level rise as temperatures continue to rise and the Greenland ice sheet continues to decline. The massive ice sheet faces a point of no return, beyond which it will no longer fully regrow, permanently changing sea levels around the world. Under scenarios in which global warming goes beyond 2°C, the Paris Agreement target, the new research shows significant ice loss is expected, with several meters of global sea-level rise persisting for tens of thousands of years. The warmer the climate, the greater the sea-level rise.

Read more in The Cryosphere 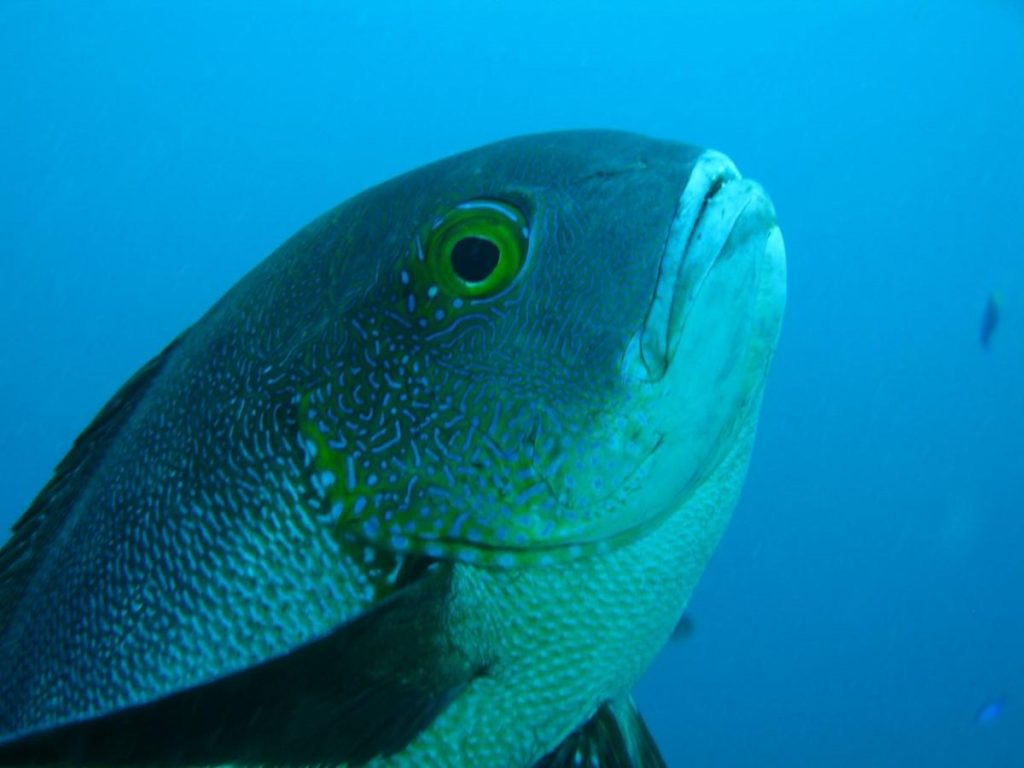 An 81-year-old midnight snapper caught off the coast of Western Australia has taken the title of the oldest tropical reef fish recorded anywhere in the world. The octogenarian fish was found at the Rowley Shoals — about 300km west of Broome — and was part of a study that has revised what we know about the longevity of tropical fish. The research identified 11 individual fish that were more than 60 years old, including a 79-year-old red bass also caught at the Rowley Shoals. 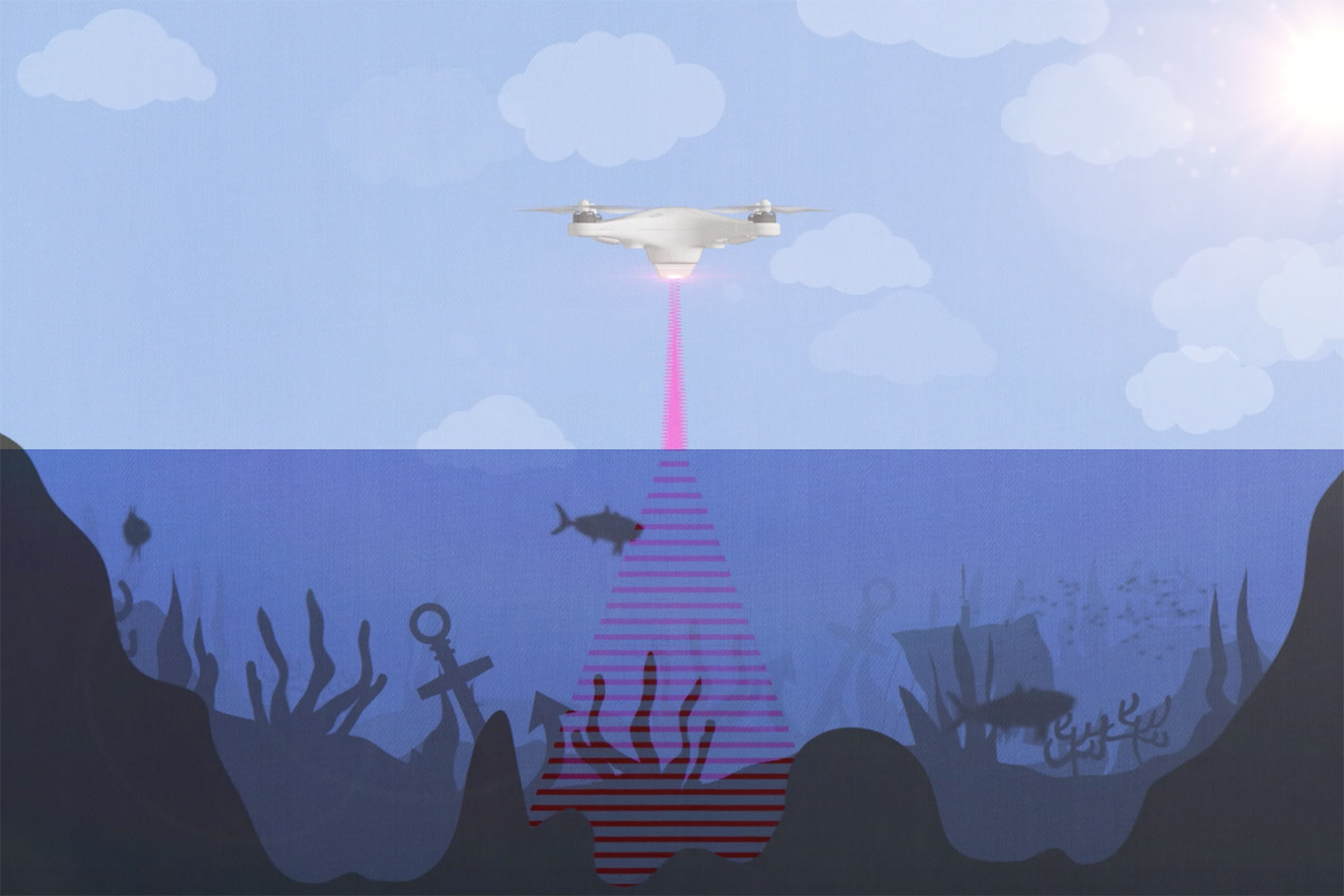 Stanford University engineers have developed an airborne method for imaging underwater objects by combining light and sound to break through the seemingly impassable barrier at the interface of air and water. The researchers envision their hybrid optical-acoustic system one day being used to conduct drone-based biological marine surveys from the air, carry out large-scale aerial searches of sunken ships and planes, and map the ocean depths with a similar speed and level of detail as Earth’s landscapes. 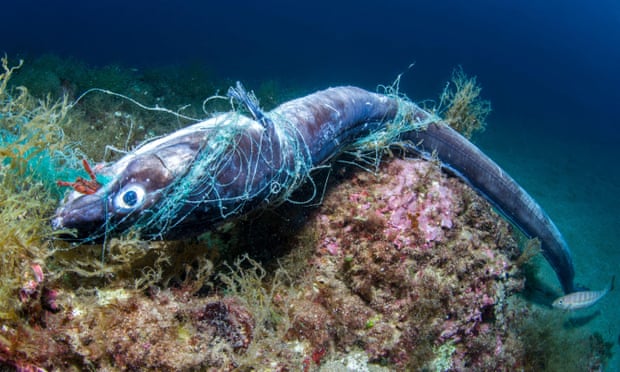 Europe’s marine protected areas (MPAs), set up to prevent biodiversity loss at sea, are failing to protect the oceans according to an excoriating report from auditors. Examining actions to protect marine life over the past decade, the European court of auditors raised a “red flag” warning the EU had failed to halt marine biodiversity loss in Europe’s waters and restore fishing to sustainable levels. Its report concluded there had been “no meaningful signs of progress” in the Mediterranean, the most overfished sea in the world, where the report said fishing is now at twice the sustainable level.

Earlier this month, the Canada-Newfoundland and Labrador Offshore Petroleum Board accepted a bid from oil company BP to explore for oil and gas in an area that includes part of Atlantic Canada’s largest marine conservation area. The move to open part of the Northeast Newfoundland Slope Closure marine refuge to oil and gas exploration has alarmed conservation groups. It has also highlighted how the confusing variety of approaches that Canada is using to reach its marine conservation goals can result in wildly varying levels of protection. 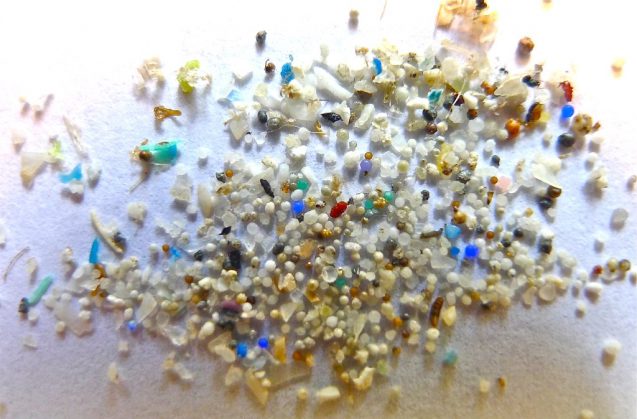 New research found microplastics in every sample taken from a vast fjord system in remote Chilean Patagonia, showing the immense global scale of marine plastic pollution. Cristóbal Castillo and his research team from the Universidad de Concepción published their findings last month in the Marine Pollution Bulletin. Microplastics are plastics that are less than five millimeters in length, or smaller than a sesame seed. Microplastics can expose living beings to harmful chemicals, some of which have been linked to a multitude of health problems, including various cancers.

Read more in the Earth Institute 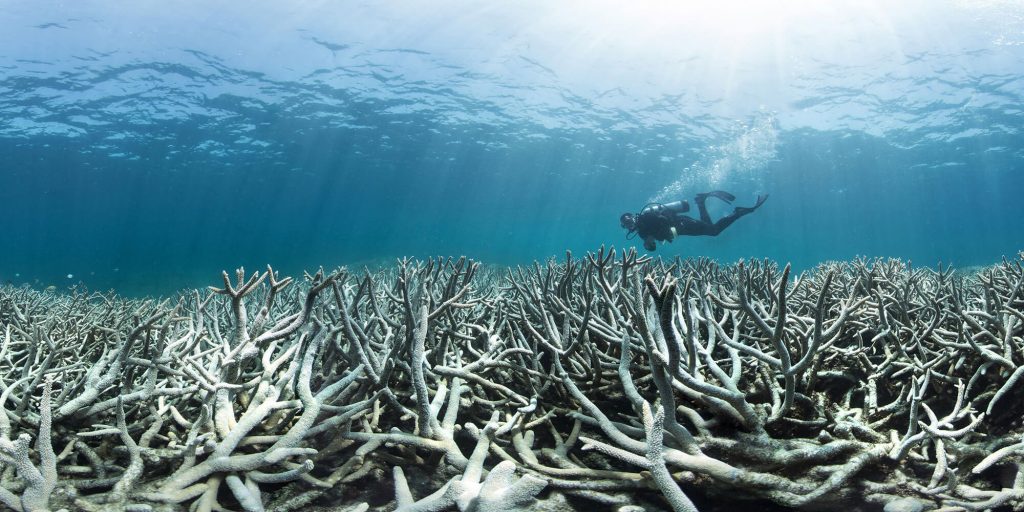 The United Nations recently released a new report projecting future coral reef bleaching globally. The lead author of the report, Ruben van Hooidonk, is a scientist with NOAA’s Cooperative Institute of Marine and Atmospheric Studies based at the University of Miami (UM) Rosenstiel School of Marine and Atmospheric Science. Under the fossil-fuel aggressive SSP5-8.5, annual severe bleaching (ASB) is projected to occur within this century for 100% of the world’s coral reefs. The average projected year of ASB is 2034, nine years earlier than was projected as a global average.

12. Coasts drown as coral reefs collapse under warming and acidification

A new study shows the coastal protection coral reefs currently provide will start eroding by the end of the century, as the world continues to warm and the oceans acidify. A team of researchers led by Associate Professor Sophie Dove from the ARC Centre of Excellence for Coral Reef Studies at The University of Queensland (Coral CoE at UQ) investigated the ability of coral reef ecosystems to retain deposits of calcium carbonate under current projections of warming and ocean acidification. 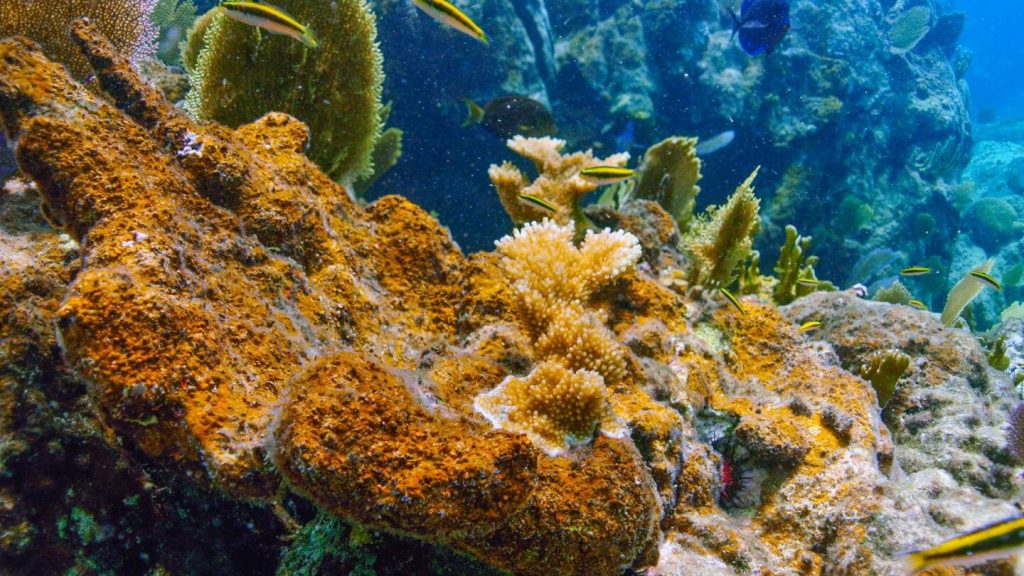 Human activity endangers coral health around the world. A new algal threat is taking advantage of coral’s already precarious situation in the Caribbean and making it even harder for reef ecosystems to grow. Just-published research in Scientific Reports details how an aggressive, golden-brown, crust-like alga is rapidly overgrowing shallow reefs, taking the place of coral that was damaged by extreme storms and exacerbating the damage caused by ocean acidification, disease, pollution, and bleaching.

PrevPreviousSea Save Foundation “Ocean Week in Review” Nov 6, 2020: We Gather News; You Stay Informed
NextThank you, Cocos Island Intern, William Henriques! We look forward to reading more of your blogs when you return in December!Next
Facebook Twitter Instagram Linkedin Youtube