Shark populations are declining rapidly on a global scale because humans have replaced them as the ocean’s top predators. One of the most detrimental practices is shark finning. This is the process of slicing off a sharks’ fins and discarding the rest of the still-living animal into the ocean where it sinks to the bottom and dies a slow painful death.

Shark fins are tempting targets for fishermen because they have high monetary and cultural value. They are used in a popular dish called shark fin soup, which is a status symbol food in Chinese culture.  Today shark fin soup is still prevalent in many Asian countries. Well-honed conservation, advocacy and education campaigns have cut China’s consumption of shark fin soup by 80% since 2011. This hard-won success is offset by a rise in the consumption of this dish in places such as Thailand, Vietnam, Indonesia and Macau.

Many fishermen prefer to practice shark finning instead of bringing whole sharks to the market because the fins are far more valuable than the rest of the body, sometimes selling for as much as $500 a pound ($1,100 a kilogram). Many fishermen prefer to only keep the shark fins— one to five percent of a shark’s weight—and throw the rest of the shark back into the ocean, rather than have the less valuable remaining shark take up space on their boat. 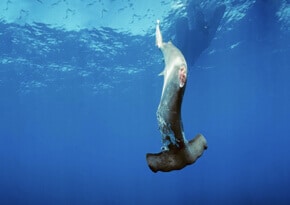 1. Shark finning is an inhumane, unsustainable and wasteful practice. Due to the high market value of shark fins that are sought to produce shark fin soup, fishermen seek to fill their boat holds with Chodryichthese fins.  The process of collecting the fins routinely requires that the fins are hacked off the still living animal. The shark is then tossed back into the ocean where, unable to swim, it “torpedoes” downward until it hits the bottom.  The animal lies helpless as it slowly dies.

2. Cruelty is not the only reason to stop this practice. Another major factor is that shark finning is having a catastrophic effect on shark populations around the world. Approximately 100 million sharks are killed globally each year. With their slow growth and low reproductive rates, sharks are highly susceptible to extinction. It is difficult for many shark species to replenish their populations as quickly as they are being diminished.

3. Sharks play a critical role in ocean ecosystem health.  They hunt weak members of fish schools and quickly cull the mutated and ill fish before entire fisheries can be affected. Today, some shark populations have decreased by 60-70%.

4. Another detrimental effect is the loss of value for coastal communities. One estimation gives living hammerhead sharks the value of $1.6 million over their lifetime,  significantly higher than the $200 value killed sharks can sell for.

5. Consuming Shark fins is dangerous. The cartilage has a high level of mercury and high levels of a potent neurotoxin, Beta-methylamino-L-alanine,  that scientists have linked to neurodegenerative diseases like Alzheimer’s and Parkinson’s, according to a recent study published in the journal Marine Drugs.

What Sea Save is Doing

Give em the Fin – A five-year campaign was completed after Sea SaveFoundation was able to get 20,000 shark advocates from around the world to unite and send a strong message that sharks are important and that shark finning is unsustainable.  Participants held their hand above their head (symbolizing a shark fin), took a photograph and uploaded it to our online mosaic. SCUBA groups, celebrities, researchers in Antarctica, wedding parties, school groups and more all took this opportunity to raise their voices and say, “Sharks are important, we are important, stop the poaching.”

Wins for Fins – To quote Sea Save Foundation, board member,  Edi Frommenwiler, “If we can clearly see our successes, we will be motivated to continue our efforts.” Wins for Fins is an information hub. Using Google Maps, we placed geographic pins representing every protective policy and victory that moves us closer to a universal ban of shark finning. This serves as a resource center as well as a source of inspiration when we want to see how far we have advanced in our battle against shark finning.

The 19th meeting of CITES is expected to take place in Panama City, Panama in November 2022. Sea Save Foundation will be attending and participating in this conference. We will be reviewing proposals and negotiating Appendix inclusion of all at-risk marine species and working to strengthen global anti-poaching efforts.

Voice of Cocos Island- Cocos, also known as The Island of the Sharks is one of planet Earth’s final wild places. This is a Costa Rica National Park and a UNESCO World Heritage Site.  Sea Save Foundation co-founders have been working to protect this island from poaching since the early 1990s. The remote location of this island has protected it from development and pollution, but it presents a formidable challenge for anti-poaching efforts. Out of view, it would only take a few months of unchecked poaching to decimate this natural wonder. The “Voice of Cocos Island” is a publication that encourages and enables national park officials, scientists, SCUBA divers, and island visitors an international platform from which they can communicate their experience and tell the island’s story. 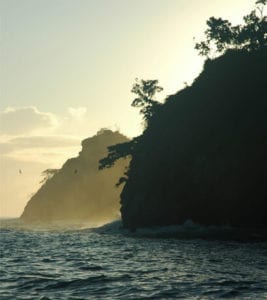 Ocean Week in Review – Every week we round up all the latest significant ocean-related news stories and present them together in a concise, digital digest format.  This collective, well-vetted publication “The Ocean Week in Review” raises awareness in an increasingly noisy and fast-paced world. We believe informed advocates are best positioned to help us protect sharks and all marine species.

Advocacy – Call to Action –We build advocacy platforms that bridge the gap between you, the educated public, and decision-makers in the private sector and government. Politicians want to be re-elected, private companies want to sell their product so if they hear from a sizable number of their consumers or constituents that they demand shark protection, they make decisions that protect sharks and our oceans.

One current example is the opportunity to urge members of the United States Congress to pass a federal bill outlawing the sale of shark fins. To take immediate action CLICK HERE.

If you would like more information about the history of this bill you can read more on our blog post “The Circuitous Migration of the US Shark Fin Ban Bill”.