Listen to the Science, Protect the Florida Goliath Grouper

"Do not bend to the pressure. Have the courage to continue the protection of the Goliath Grouper." 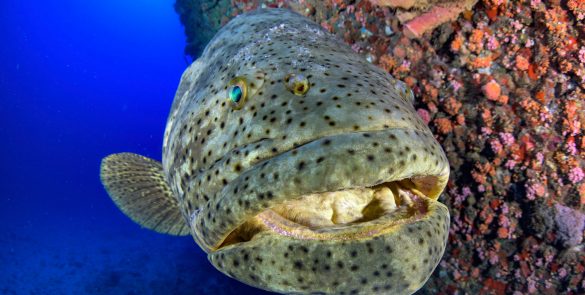 Sarah Frias-Torres, PhD, has been studying and working with Florida Goliath Groupers since 1992. Her research-based observations are outlined below in a letter she sent to the FWC. Her appeal to protect this species was ignored.

I urge you to reject the draft rule for Goliath Grouper harvest and continue to manage this species for conservation through the 1990 federal and state moratorium on harvest. I know you are under extraordinary pressure from the recreational fishing lobby to reopen a kill fishery. Do not bend to the pressure. Have the courage to continue the protection of the endangered Goliath Grouper. Show the leadership required as stewards of Florida’s fish and wildlife. My recommendation is based on 18 years of research on this species.

This is the most damaging paragraph in the proposed ruling:

“Staff recommends allowing harvest of up to 200 goliath per year, with a bag limit of one fish per person per open harvest season. The Fish and Wildlife Research Institute (FWRI) has advised that harvest of a limited number of fish is not expected to impact the population or rebuilding of the goliath stock.”

Such a statement reveals a lack of FWC staff to properly analyze scientific data and to understand the biology of Goliath Grouper. The apparent “surplus” of juvenile Goliath Grouper, with the target sizes between 20 – 36 inches, and a 200 fish take per year, is a result of a shifting baseline. Your staff is using a baseline of almost zero juveniles in the mangroves after the 2010 mass mortality event due to cold fronts when an estimated 90 % of the entire juvenile population died. During the May 2021 FWC Commission meeting, you finally accepted the concept of shifting baselines. Here, your staff is making the erroneous conclusion that there is an over-abundance of juvenile Goliath Grouper because they are comparing existing numbers to a time when almost the entire juvenile population had died. Further, this harvest will concentrate fishing pressure in the only two remnant fringing red mangrove habitats left in Florida: Ten Thousand Islands, and the Florida Bay side of the Florida Keys. The ongoing collapse of the Indian River Lagoon system and widespread habitat degradation in Florida result in any other mangrove stands unsuitable as habitat for juvenile Goliath Grouper.

In comparison, the adult population in the reefs is decreasing. We see numbers in reef surveys are consistently going down, in 2016 and 2018. This 2021 spawning season, divers have seen spawning aggregations with fewer breeding adults compared to 10 years ago. You should know by now, that for a population to increase, it needs to have increased in the number of breeding adults. And that every juvenile killed will not become a breeding adult.

The fact that you are even considering killing an endangered species, in the context of a decreasing breeding population, and decreasing critical habitat, reveals both you and your staff are either denying reality or perhaps need help from the scientific community to understand how to manage an endangered species. Is your goal killing Goliath Groupers to the brink of extinction? Because if you approve this ill-planned harvest, that’s exactly what you are going to do.

To note, that you have already approved a kill fishery for Goliath Groupers:

.- A targeted catch and release fishery; You allow targeted recreational catch and release in Florida state waters. This is in violation of the 1990 federal and state moratorium on Goliath Grouper harvest. Opening the targeted fishery was done without proper analysis of mortality effects in both juveniles in mangroves and adults in reefs. During the May 2021 Commission meeting, FWC staff mentioned a 5 % mortality rate. This is a made-up number based on no scientific evidence. We know mortality from recreational catch and release in other grouper species can range between 10 % to 70 % depending on the depth and size of the fish (Shertzer et al. 2018). Both juveniles in mangroves and adults in reefs are now subject to the targeted catch and release. Even adults in spawning aggregation sites, with lethal consequences. Diving at these sites, we see Goliaths with eyes gouged out and other signs of catch and barotrauma. We don’t know the long-term consequences of such damage.

.- Poaching: illegal take is rampant in Florida. Even the breeding adults at spawning aggregation sites are being targeted. There’s poaching with hook and line and with spearfishing. When diving, we regularly see Goliath Groupers with spearfishing wounds, these are the ones that survived, or are in the process of dying from the wounds. We are talking about spears going through their belly, and seeing the fish dying in agony for days. Think about the type of “fishermen” who are happy with such outcomes. These encounters have been reported to FWC with no results.

“Being big and beautiful does not protect you from fishing” This was a statement made by one of you during the May 2021 FWC Commission meeting, as a justification to start killing Goliath Groupers again. However, being small and ugly does not protect you either from fishing.  An insignificant, ugly-looking fish will have no luck generating income on its own. It is because Goliath Groupers are big and beautiful that people want to SCUBA dive with them; people from all over Florida, the USA, and the world. Divers pay to see Goliath Groupers, and this money goes to local businesses and goes directly into the Florida economy. A live Goliath Grouper is worth more money than a dead one, and it will generate income and taxes every year, throughout its long lifespan.

Honor your role as stewards of Florida’s fish and wildlife. Reject the harvest proposal. Continue managing Goliath Grouper for conservation.

Thanks for your time