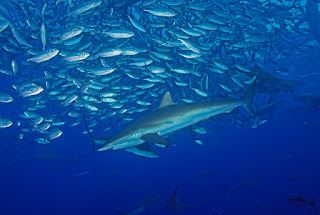 I dove for a second time yesterday at a place called Alcyone, off the eastern edge of the island. We motored out into the swell, about half a mile off shore, where a line of buoys bobbed in the waves. Double checked our equipment, secured the boat to the safety line off of the buoys, and flipped over the side of the launch. Below us, a line descended down at an angle into the murky blue depths. There were four of us diving, and we descended one by one, hand over hand along the line. A submarine mountain-top materialized below us, and the line became crusted with barnacles as we neared the rocky summit.

We explored the terrain of the mountain’s tip, skimming over the surface of volcanic rock and patches of sand, examining the underwater alpine garden of minute aquatic life thriving on the rocks. All around, the submarine landscape dropped away precipitously into the mysterious twilight of the greater depths. A school of big-eyed jacks appeared overhead, and then was gone. Hammerheads emerged up out of the gloom off of one side of the summit. Reef sharks slid along over the bottom, littered with shark teeth, looking for scraps to feast on.
Our time at Alcyone was especially limited because the dive’s average depth is 28 meters (greater depths mean shorter dives, because air consumption happens at a more rapid rate) and all to soon we got the hand signal that it was time to begin the ascent. Swam over to the rope, and slowly began moving up, little by little, letting air out of our expanding dive vests as we went. As the bottom disappeared, several lone hammerheads swam below us, scanning the summit for an inviting meal, then they too disappeared and only the line and the streams of bubbles from our regulators were visible.
As we motored back to Wafer Station, Esteven, a funcionario, commented that the site had been pretty good, but not at its best. I find it hard to believe it gets better, but I heard it straight from the authority; when the currents are ripping, they bring with them all sorts of food and the underwater mountain-top swarms with aquatic life in the midst of a feeding frenzy. According to Esteven, Alcyone is a sight to behold in these instances; in fact, when the currents rip, it’s known as the best dive sight around the island. It must be incredible, otherworldly.
The skies opened up as we returned to Wafer, and the rain pounded down steadily all day. I hunkered down, slept for a while, wandered up to dinner and then back down to the Casa, planning on turning in early after sending off the blog for the day. But as I was going through a final round of edits around 8:30 pm, there was a loud rapping against the door. I opened it, and there stood Frank and Daniella, dripping wet. “Tu quieres aprender bailar?” Did I want to learn how to dance? Bed called, and the blog wasn’t quite done, but I don’t know a thing when it comes to dancing, and you never know when that kind of know-how will come in handy. “Absolutely.”
When I got to the salon, about 100 yards up the pebble path through a torrential downpour, the dancing was in full swing. The furniture was pushed aside and a computer playing Latin music was hooked up to a set of speakers. Frank and Daniella were spinning each other and Guillermo and Vilma were waltzing around the floor, – though I think the more accurate verb (if it existed) would be merenguing.
First dance I learned was the salsa – pretty straightforward when it comes to the footwork. Left forward, right back, left forward, step left, step right, step left, step right. Repeat. But my feet kept getting in the way, I just didn’t have the right swing in the hips, and my upper body was stiff – downright mechanical. I need to work on my rhythm, need to relax and let the rhythm flow through my body. But I fear only so much comes with practice, and unfortunately, grace on the dance floor is not one of my gifts. But there was not time for me to dwell on my incompetence, because it was on to the next dance: the merengue.
Over the course of the next hour I learned a total of six Latin dance steps. Just the footwork, mind you; my teachers wisely let the hips and arms slide for the first lesson. I practiced alone. I practiced with Daniella. I practiced with Guillermo. Contrary to my long-held belief, dancing is fun, and I couldn’t wipe the smile off my face.
When the dancing was done, I collapsed sweaty and tired into one of the chairs pushed to the side. An excellent Sunday by all accounts. I was exhausted, yes, but happy, content with knowledge that I had been diving and dancing in one of the most spectacular places on earth. And there’s still more to come.
PrevPreviousCocos Island: There’s Not Just One Piece in the Puzzle
NextCocos Island Repeat OffendersNext
Facebook Twitter Instagram Linkedin Youtube