A Retrospective: Constructing a Framework for a Sustainable Future Continues at The United Nations: Ocean Conference

by Georgienne Bradley and Abhi Iyer
“The ultimate test of man’s conscience may be his willingness to sacrifice something today for future generations whose words of thanks will not be heard.”
– Gaylord Nelson
Dateline: June 7, 2017
Spirits at the United Nations: Ocean Conference are high this week.  We originally entered the building and the emblematic General Assembly room tenuously.  The United States had just withdrawn from an agreement made in Paris at a similar UN Conference.  How would the international community react?  Could the United States delegation participate effectively?  Would concerns that future agreements might be broken overshadow all discussions and undermine the meeting?
These concerns were quickly resolved.  There seems to be an unspoken understanding that to successfully protect the oceans we must “double down”. The United States delegates, NGO representatives, and visitors are all talking about cutting edge ways to protect oceans, increase yields and make the human relationship with oceans sustainable and healthy.  But woven through most conversations are also threads of climate change discussion.  Talks about making our deadlines more ambitious fill the halls.  The Green Fund recently de-funded by the Trump administration is not an issue; instead, a Blue Fund is being created.  For people who believe that environmental stability is a critical issue, this is great news.  But to understand the strength of the United Nations: Ocean Conference and from where it gets its teeth, we must understand history.  Why is there an Ocean Conference?  What are we trying to achieve? 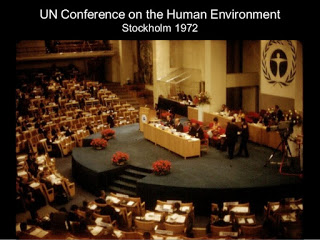 The United Nations idealists who believe we can work globally to ensure environmental health have been working on this issue for over four decades. Momentum is increasing as more people join the effort and the cause is backed up with a growing body of more sophisticated science.
A great place to start this story was in 1972 when the global challenges presented at the United Nations Conference on the Human Environment were recognized, yet ten years later they remained unaddressed. Still absent was a plan: a development concept that would reconcile economic development and environmental protection.
So in 1983, the United Nations: World Commission on Environment and Development was formed to examine sustainable development.  The official commission definition read, “the organizing principle for meeting human developmental goals while sustaining the ability of natural systems to provide the natural resources and ecosystem services upon which the economy and society depends.” 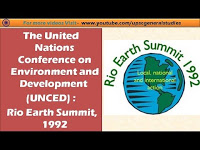 It took until 1992 for the UN to convene the Conference on Environment and Development dubbed “Earth Summit”.  The two big victories realized at this meeting were
o   The creation of “Agenda 21”: a voluntary action plan for United Nations delegates that would culminate in sustainable development and

o Agreement to convene the Climate Change Convention with the objective to stabilize greenhouse gases. This agreement led to the Paris Agreement.

At the 2002 “Earth Summit” (Also known as Rio +10) sustainable development was identified as the most important goal for all national, regional, and international institutions and states. 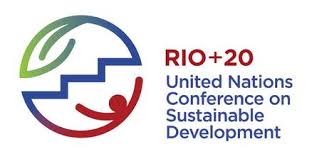 At the 2012 “Earth Summit” (Also known as Rio +20) the third international conference on sustainable development was hosted.  During this conference, a resolution known as “The Future We Want” was reached. The heads of the 192 governments in attendance renewed their political commitment to sustainable development and their commitment to the promotion of a sustainable future. Key themes of this agreement were poverty eradication, energy, water and sanitation, health, and human settlement. 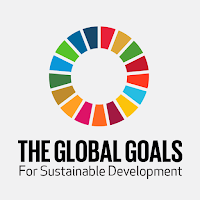 In 2016 the United Nations met in Paris to discuss how the international community could work together in constructively responding to the scientific evidence that climate change was happening at an escalating and unprecedented rate.  The member countries hammered out The Paris Agreement also known as the Paris Accord.   Every member country signed this agreement except for Nicaragua (as they felt it was not ambitious enough) and Syria.  The United States backed out of their agreement in June 2017 when President Trump cited that the international accord was not fair to the workers of the United States and that the US was carrying too much of the financial burden.

This process has spanned more than four decades. A few steps forward followed by an occasional step back seems to be the current progression; however there is an international energy demonstrated at this conference that has not been seen before. The successes of the 2017 Ocean Conference are promising. People realize that collectively we need to roll up our sleeves, be ambitious and make the health of the Earth a top priority for future generations.