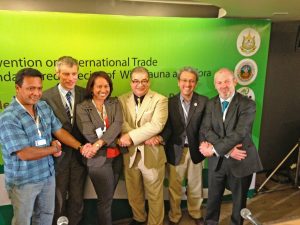 CITES is the acronym for the “Convention on International Trade in Endangered Species of Wild Fauna and Flora”  This is a treaty, comprised of 178 countries, was created in response to a resolution drafted by the International Union for Conservation of Nature (IUCN). 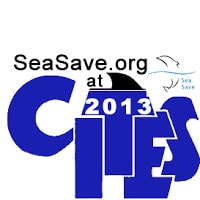 The purpose of CITES is to determine international trade regulations.  It is intended to insure that
international trade does not threaten the survival of any plant or animal.  Approximately 33,000 species fall under the CITES umbrella of protection, approximately 5,000 of these species are animals. Proposed species are discussed and then member countries vote if they would like to place the species in one of three appendices (Appendix I, Appendix II or Appendix III) each Appendix reflects a different level of endangerment and suggests sanctions that should be considered for animals in that category.
Appropriate Appendix levels for proposed species are decided at the Conference of the Parties (CoP) held approximately every three years.  At this meeting, flora and fauna can be added to Appendices, promoted, demoted or deleted.  The category in which the species is placed will determine the international protection it will be afforded.
Member countries of the treaty are bound to abide by the laws created by CITES consensus. IA common misunderstanding is that CITES in a conservation meeting.  While National and International NGOs may apply to participate, voting members are delegates sent by their country to represent the national interests of that member country.  If the animal or plant being proposed for sanctions represents a high revenue stream or if the specimen is heavily imported into the member country, delegates may be instructed to vote against protective sanctions.
The 16th Meeting of the Conference of the Parties to CITES is in progress during the writing of this blog.  It is taking place in Bangkok, Thailand from March 3rd – 14th.  Of particular interest for Sea Save Foundation is the proposal to add Scalloped Hammerhead Sharks, Great Hammerhead Sharks, Porbeagle Sharks and Manta Rays to CITES Appendix II.  This would simultaneously afford greater attention and protection to these species and would also allow scientists to collect more reliable data about shark numbers and dispersal.

Current arguments posed against this proposal include the following:  a) the collected data does not make a compelling argument, b) it would be too difficult for customs officials to differentiate fins from protected species vs non-protected species.  These queries have been clearly addressed by scientists on site.

CITES will be meeting on March 3-14, 2013 in Bangkok, Thailand for their 16th meeting, and during this meeting a variety of amendments and proposals will be discussed and voted on. One of those will be a proposal by Costa Rica, which was also co-sponsored by Programa de Restauracion de Tortugas (PRETOMA), Fundacion Marviva, Ministry of Environment and Energy of Costa Rica and a few others. In September, Costa Rica (along with the others named) brought the initial amendment to light to get Scalloped Hammerheads under Appendix III, and under that Appendix they will receive protection (in at least one country) 90 days after Sept. 25, 2012. Under Appendix III (if you remember from the first blog) any country can unilaterally place a native species in it, no voting needed.

What will happen now is that during the upcoming meeting, the proposal to get Hammerheads protected will be voted on, and if approved (a 2/3 vote is needed) Hammerhead sharks will be placed within Appendix II; which gives them a tremendous amount more protection. If approved, the export of Hammerheads would be regulated in whole, parts and derivatives. Back in 2010 the United States and Palau tried to get Hammerheads protected under Appendix II, but the 2/3 of the votes was not achieved.
Sea Save would like to attend this upcoming meeting in March. We would like to be there and vote in favor of Hammerheads (of course, along with other animals) but, it’s not that easy. Susana Navajas of Sea Save was interviewed earlier last week about this issue and about CITES and sharks.

For additional information, listen to Sea Save Foundation’s Susana Navajas discuss the objectives of the upcoming CITES conference and how we hope to gain protection for hammerhead sharks.