I slept through my 2:45 am alarm this morning and leaped out of bed and out of my room and into the hall in one fluid motion when I looked at my watch and it read 3:02 am. Found the rest of the patrol crew placidly sipping on their morning coffee, looking at my door expectantly. I threw some sugar in the last cup of coffee, drained it, and scarfed down a packet of gallettas – the equivalent of four Nilla Wafers – and that was all for “first breakfast.”

Under the light of the setting full moon, we motored out to the patrol and fired up the patrol boat’s engine. Cast off from the mooring, and set a course north, passing between the hulking silhouette of Manuelita and the island. 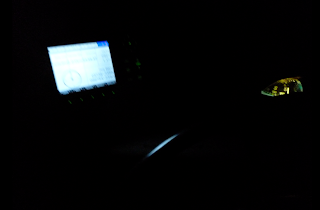 To avoid visual detection by fishing boats that might not have radar, the only lights on board the patrol boat at night are those of the compass and GPS.
Almost immediately, two fishing boats showed up on our radar, eight miles off the island’s shores. We set a course for them, but they must have had radar because when we were six miles away from them, they began running out of the park. Still, we followed them until we were ten miles out, and the lanchas were thirteen (a good mile outside of the boundary, and beyond the ranger’s jurisdiction).
We cut our engines as the first of dawn’s light seeped into the early morning, and so did the fisherman – their blips stopped moving on our radar, and we could see their running lights bobbing in the waves just three miles away. For the next two hours, we sat near the park’s boundaries, hoping our presence would discourage the fishermen and force them to leave the area, or at least deter them from re-entering. But they simply sat there a mile outside, knowing they were immune and that they could out-wait us. 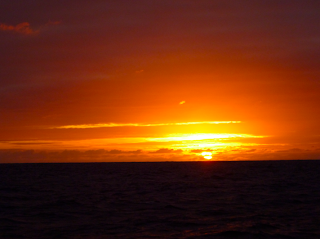 Sunrise along the park’s boundary line
Eventually, we started moving west, scanning our radar for other boats, and keeping an eye on the two we had run out of the park. When we could no longer see them bobbing on the horizon, their two dots on the radar began moving east along the boundary line, and then back into the park. 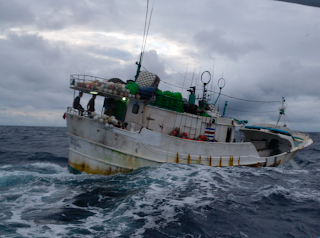 Caught red-handed just two miles off the island’s shores (Photo courtesy of Frank Martinez Lopez)
It’s a waiting game, day after day after day, and it’s one the fishermen know they can win. We chase them out of the park. They wait until our inevitable return to Wafer, and they come right back in. They’re not shy about being here. Below is a photo and video of the boat that was caught two miles out from Wafer Bay during Monday morning’s patrol. Captain Guillermo Perez took down the name and hull number of the boat, but they wouldn’t respond to radio communication, and so their names and fishing license numbers remain unknown.

While we were out on patrol to the northeast, another fishing boat passed right in front of the Wafer Bay station this morning. Reports from the funcionarios who saw the boat estimate that it was around four miles offshore.