Sore feet, inspiration and hope at the pinnacle of Cocos Island

Share on facebook
Share on twitter
Share on linkedin
It’s the tail-end of yet another Sunday, and I’m sitting in my room contemplating the cool air flowing through the industrial-grade screen of my single window, the smell of clean laundry, my sore feet, and today’s hike to the island’s summit, Cerro Yglesias.
My companions for the day were Pablo, the island’s in resident Coast Guard, Glorianna, a high school senior from Monteverde, and Julia, a Mexican-German taking a year off before college to work in Costa Rica. After a 5:30 am wake-up call to schlep the new shipment of provisions up to the kitchen, a quick breakfast, and a surprisingly short morning meeting, the four of us were underway shortly after eight. A scattering of cumulus clouds hung tranquilly several thousand feet up beneath crystalline skies, the station lawn was wet with dew, and the crisp morning air was warming rapidly under the brilliant sun as we set out. 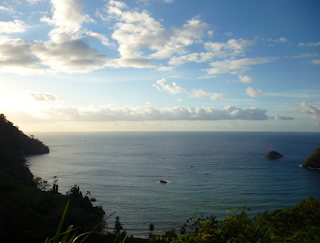 Wafer Bay in the Sunday evening light
To get to the trailhead, we crossed the buoy bridge (swaying rhythmically to and fro with the heavy tread of four pairs of boots) spanning Rio Ganlo. Just downstream of the bridge, Sendero Cerro Yglesias disappears into the forest and veers up the steep slope of the ridge that descends down to the Wafer Bay river delta. Atop the ridge, the trail wends northeasterly (Snapshot: View of Wafer Bay, moss-covered cliffs of the southern shore, Roca Sucia to the west, Roca Cascara to the northwest, and Wafer Station to the north) up into an open-understory forest, where bromeliad cling to trunks and branches and thigh-sized vines drape from tree to tree. We meandered along the path at a leisurely pace, following the ridge as it veered to the south and continued to climb higher and higher through an increasingly claustrophobic rainforest. 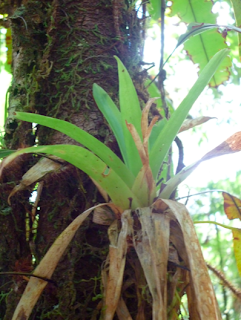 Bromeliad clinging to a tree trunk along the trail
From a distance, the climb to Cerro Yglesias looks no more then a hop, skip, and a jump. But in reality, it’s many, many slow, plodding steps. The trail is relentlessly steep and the footing is treacherous – uneven, and loose, oftentimes slippery. Onward we trudged, and the minutes stretched into hours. 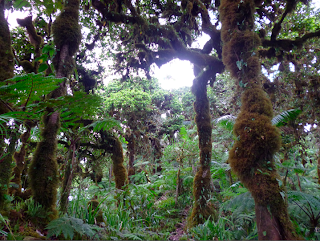 El bosque nuboso
Then suddenly the scenery changed and the cloud forest appeared. One moment the trees were draped in bromeliad, and the next they were coated in a thick layer of brown-green moss. The air felt damper, fresher. The day’s light dimmed, acquiring a golden, enchanted-forest slant and hue. A light breeze swayed bearded branches reminiscent of Tolkien’s Ents, rushing softly through el bosque nuboso. Cocos Finches darted from branch to branch. Once we hit the cloud forest, that before-the-summit excitement flared, but quickly faded as we realized we still had much ground to cover. No, it wasn’t the cloud forest, but the view of the pyramidical summit of Cerro Yglesias from the flattened top of Cerro Pelon that gave our small group of four its [much needed] second wind. 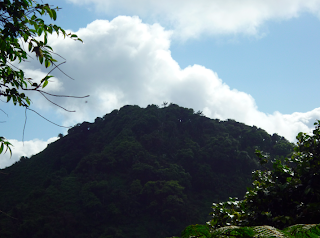 Cerro Yglesias, from the near to summit of Cerro Pelon
After Cerro Pelon, the trail drops abruptly down into the saddle between the two peaks, then emerges up out of the saddle along an east-west axis ridge. To the north of the ridge, the island drops precipitously into the white-capped, cobalt blue Pacific; to the south, the land falls gradually down to the V of Yglesias Bay. 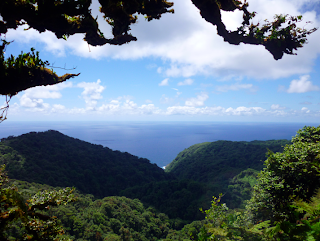 The view of Yglesias Bay from the saddle
The ridge-trail culminates at the summit, emerging out of the cloud forest onto small patch of crab grass with a sign (Cerro Yglesias 634 M) nailed to a gnarled and wizened stump, and stake driven into the ground to mark the peak. We threw ourselves to the ground, and after passing around water and the wafer cookies that comprised our only sustenance, we sat in silence. I listened to the distant rhythm of waves beating against the shore 634 meters below, felt the ripples and eddies in the current of wind streaming over the summit, gazed down at the froth-ringed Dos Amigos and out at the horizon. Magnificent frigatebirds (Fregata magnificens) soared overhead. A lizard appeared on the summit sign, then darted away as I moved to get a closer look. The sunlight waxed and waned with the passing of clouds, and I lay back and closed my eyes, soaking it up. 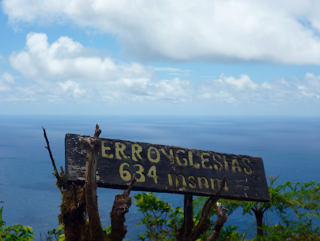 The summit sign
We stayed on the summit for three hours, milking our time and the good weather for all it was worth. Who knows if any of us will ever return? The sun, the wind, the clouds, the Pacific, Dos Amigos – we took it all in, and it was with reluctance that we finally began the trek back to Wafer in the mid-afternoon light. The only thing driving us down was the desire for a heaping, steaming plate of rice and beans; wafer cookies just don’t cut it on a day-long hike. 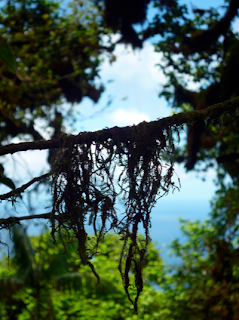 A bearded branch
On the descent, I contemplated the forest around me, this magnificent island and the wilderness that it is. And as I thought about wilderness in general, and about how quickly it seems to be disappearing, thought about overpopulation and urbanization and the technological revolution, Edward Abbey’s book Desert Solitaire sprang to mind. It’s one of my favorites, and these two passages in particular strike me as being particularly relevant:
“A man could be a lover and defender of the wilderness without ever in his lifetime leaving the boundaries of asphalt, power lines, and right-angled surfaces. We need wilderness whether or not we ever set foot in it. We need a refuge even though we may never need to set foot in it. We need the possibility of escape as surely as we need hope; without it the life of the cities would drive all men into crime or drugs or psychoanalysis.”
“Wilderness is not a luxury but a necessity of the human spirit, and as vital to our lives as water and good bread. A civilization which destroys what little remains of the wild, the spare, the original, is cutting itself off from its origins and betraying the principle of civilization itself.”
The overwhelming majority of the world’s population will never see Cocos Island, never climb to its peak nor dive into its depths. But the fact that it is here, that it exists – pristine and un-pillaged – is comforting. As Ed Abbey says, civilization needs such refuges, as a source of inspiration and hope. 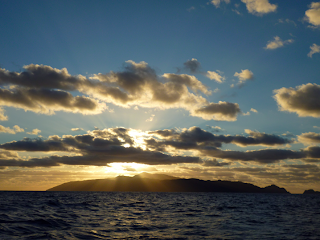 And with all of the problems facing the world today, inspiration and hope are two things we can’t afford to be short on. Which is why it’s crucial, absolutely essential, that the virgin wilderness that is Cocos Island remains exquisite and untouched.