Share on facebook
Share on twitter
Share on linkedin
I watched this morning’s Channel Seven news with mild interest, more to practice my Spanish than anything else. The rain and resultant flooding continue across Costa Rica, the Venezuelan president Hugo Chavez is sick, and there was a big cocaine bust somewhere on the continent. Really, I was more focused on the plate of pinto in front of me and the strong, hot coffee in my left hand. Emphasis on the coffee focus.
But my early morning caffeine reverie was broken abruptly by the island director, Golfin: “Listo por el submarino?” Ready for the submarine?
Whoa. That wasn’t out of the blue or anything. Did I hear him correctly? “El submarino?”
“Si.”
Pinto and coffee forgotten, I sprang to my feet and hustled down the path to the Casa, taking the stairs two at a time up to my room. Dry clothes…check. Camera…check. Dry bag for both…check. Then out the door and down to the river landing before I had a moment to catch my breath and process. A submarine dive! Two months ago? The thought was laughable, unthinkable, out of the question.
I was dropped off on the deck of the Argo by Michael and Roberto, who continued on to another newly-arrived diving boat to give their standard introductory presentation. On board, I was introduced to the operating team of the Argo’s submarine DeepSee by a tall man with curly dark hair and serious eyes by the name of Arik. One of the submarine pilots, he would be in the control boat on the surface for this particular dive. Jose Antonio was to be the support diver on the surface with Arik. Felipe, a submarine pilot in training would be the other passenger, and Eli would be our pilot. Firm handshakes and “Pura vida” were exchanged all around, then Felipe and I were ushered into Argo’s salon for the safety briefing and the signing of the Deep See’s release form.

After the debriefing, Felipe and I were handed black socks and light blue overalls with DeepSee embroidered in white across the back. We donned our submarine attire and took several pre-dive photos under the blazing sun, and then we stepped into the submarine. “Right hand on this handle. Left hand on this line. Feet on the seat. Now right hand on the seat back. Left hand on the other side. Now both feet on your seat, and sit down.” Very precise entry instructions, followed to the letter with utmost care. Better to avoid damaging any of the delicate equipment or electric wiring that would be keeping us alive and afloat over 200 feet below the water’s surface.

The hatch clicked shut and I felt the slightest pressure in my ear canals. Then submarine instruments whirred to life, digital displays flashed on, and we pulled away from the Argo, towed by the surface support boat. We weren’t going far from Argo’s anchorage to the east of Manuelite – only 5-7 minutes of tow time. Our destination was a dive site by the name of Everest – the summit of which is some 40 meters down, and the bottom of which is a whopping 80 meters below the surface.
On the way to the dive site, I was able to find out a little more about my companions. Eli is originally from Israel, and he’s been working for the Undersea Hunter Group for three years. He stumbled upon the job while traveling the Americas after finishing his obligatory military service. He thinks he’ll probably work another year or so as a submarine pilot, but once Felipe has finished his training, he’d like to return home to Israel. Felipe has been working for the Undersea Hunter Group for a year as a Dive Master, and he jumped at the opportunity to become a submarine pilot. “Four years ago, I dropped out of business school to get my Dive Master Certification. Everyone told me it was a bad idea, because there’s no future for a Dive Master – the pay is bad and the work isn’t steady. But here I am, training to be a submarine pilot. I never would have thought this was where my life was headed, but it’s worked out.” Having just completed his first month of basic training, this was his first dive ever in a submarine. He was positively ebullient.
When the towboat stopped, Jose Antonio leaped into the water with a snorkel, making final adjustments to the submarine’s exterior, and pulling the cover off of the three-inch thick acrylic bubble. Eli began releasing air from the submarine’s tanks, and we began our descent, waves slapping against the bubble, then up and over it, and then we were submerged and sinking down into murky darkness. At 30 meters, we passed through a dim green cloud of plankton (“A new development – not something we saw here at Cocos until recently,” commented Eli), and then the summit of the seamount appeared out of the gloom. A Mobula ray (Sicklefin Devil Ray) with an eight-foot wingspan swam overhead, body rippling through the clouded blue (“Mobula’s, in particular, are curious about the submarine”). Schools of fish flashed around us, circling the summit – Bigeye Scad, Rainbow Runners, and Chubs.
We continued our descent down the side of Everest, a steep rocky slope covered in delicate Stylaster corals. Moray eels gaped out of cracks in the rock, jaws working open and shut. Octopuses blended perfectly with their mottled surroundings of red algae and white coral, and only the texture of their tentacles gave their presence away to the experienced eyes of Eli and Felipe (I was oblivious until they pointed out the suction cup pattern). Brotulas fluttered amidst the corals. An incredibly shy fish, they attempt to hide whenever they feel threatened; the catch is that they feel secure when their eyes are hidden from the threat, and oftentimes half of their flat, undulating bodies protrude from the rock where they have taken refuge. As we neared the bottom, a lone king crab was perched among the corals. “Keep in mind that everything viewed through the bubble is thirty percent smaller than it is in actuality. That king crab looks fairly small, but in reality, it’s a least a foot in diameter. Probably bigger.” 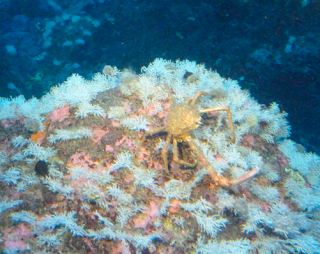 This massive king crab is missing it’s left claw, probably from a scrap with another crab
Once at the bottom, Eli guided the sub around to the “backside” of Everest, and we began to ascend slowly, ever so slowly, Eli skillfully guiding the hull within feet of the mountainside, but never making contact with the delicate marine habitat. Black coral, immense and shrub-like – three to six feet in height – swayed in the gentle current; Everest is the only place around Cocos where this black coral is found. We saw more Stylaster corals and Basket Star corals too – a kind of coral that closes into a tight, mistletoe-like ball in the day, but opens up into a spectacular star at night. Above us, a small school of Amber Jacks congregated around the summit, darting to an fro in search of a meal. Four black jacks engaged in a complex, writhing ritualistic dance. Passing in front of the submarine’s lights, the school of small, plain looking Creoles turned a brilliant red. And then the exclamation we’d all been anticipating: “Martillo!” Hammerhead sharks, a small school of 15 or so, moving through the water several dozen meters overhead.
The presence of bonitos and yellowfin tuna on the hunt above Everest meant the hammerheads didn’t stay for long. Hammerheads are very shy around other predators – and they usually stay away from wherever the action is. In fact, the hammerheads (tiburones martillos as they’re called in Spanish) don’t come to Cocos Island to hunt. They come to the island’s various cleaning stations, where other species will rid them of parasites, and they come to socialize and mate. Large schools of females, some numbering over a hundred, will congregate, with the larger females (reaching up to 15 feet in length) swimming in the center of the school, and the smaller females around the periphery. The males (significantly smaller than the females) swim into this school of females and select a mate, looking for the strongest and largest. Naturally, the healthiest, most fit males make it to the center of the shark school first. Darwin’s survival of the fittest at its best. 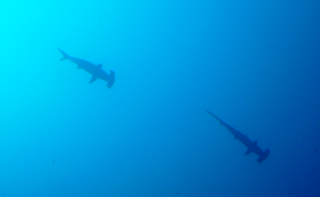 We passed from Everest towards Manuelite to Bajo Everest and then on to Bajo Manuelite in search of more hammerheads, but they proved elusive. We did, however, encounter two Galapogos sharks, another Mobula ray, and two quirky fish called Roselip Batfishes, that half walk, half swim across the sandy bottom as bats crawling across a ceiling. By the time we had finished the dive we were underneath Argo, and as Eli began to fill the sub’s tanks with air the bottom disappeared and the hull materialized overhead. Moments later the acrylic bubble emerged from the water into the blinding white light of the sun, and Jose Antonio was guiding the sub back into the docking bay, padded heavily with white buoys.

Climbing out of the submarine can only be equated to the imagined scenario of stepping out of a spaceship after some intergalactic voyage. It is at once a relief and an immense disappointment to be back in the above-water world that we know so well. It’s as if emerging from a dream, a wonderful dream, in which time seemed infinite and life so beautiful, but to wake up is to come to the painful realization that the dream world is fleeting and temporary. 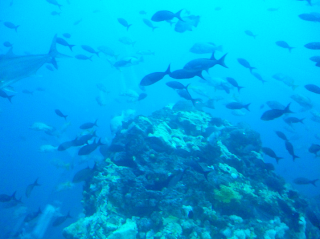 The frenzy of life atop Everest
Yes, the dream is in the past, but the feeling remains. I’ve been walking around all day cherishing the wonder and amazement, guarding the memories of the submarine world closely, to access on those days when I am far from here, desperate for beauty and hope. 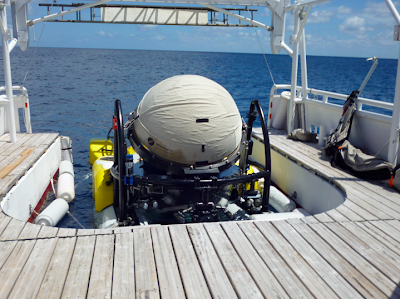