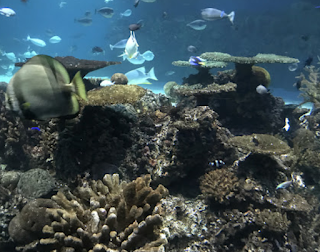 Participants at the 2020 Unite Nations “Ocean Conference” Preparatory Meeting highlighted the importance of a healthy ocean in implementing and achieving the Sustainable Development Goals (SDGs) and stressed that 2020 must be a year of concrete action for the ocean. The 2020 Ocean Conference is one of the first milestones of the UN Secretary-General’s Decade of Action for the SDGs. The 74th session of the UN General Assembly (UNGA) convened the two-day preparatory meeting at UN Headquarters in New York, the US, from 4-5 February.

Editorial: Sea Save Foundation is a participant at this meeting. We believe we must have international agreements if we are to protect oceans 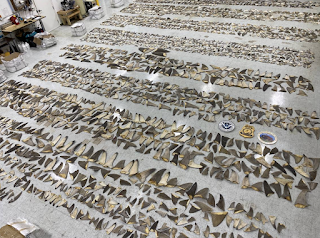 Federal officials on Monday announced the seizure of about 1,400 shark fins that were hidden in boxes in a ship docked at PortMiami late last month. The severed fins were mixed in with other “non-protected” and “non-regulated” species in 18 boxes, a spokeswoman with the U.S. Fish and Wildlife Service said in an email. Inspectors found the boxes on Jan. 24. “The goal of this seizure is to protect these species while deterring trackers from using U.S. ports as viable routes in the illegal shark fin trade,” said Christina Meister, a spokeswoman for the Fish and Wildlife Service.
Read more from “Miami Herald”

Editorial:  Sea Save Foundation continues to rally for a federal bill that would make this activity illegal throughout the United States. Canada already has this law in place.
3. Japan considers dumping radioactive byproduct into ocean 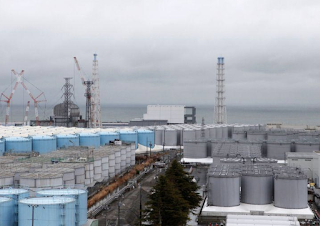 A panel of experts advising Japan’s government on a disposal method for radioactive water from the destroyed Fukushima nuclear plant on Friday recommended releasing it into the ocean, a move likely to alarm neighboring countries. The panel under the industry ministry came to the conclusion after narrowing the choice to either releasing the contaminated water into the Pacific Ocean or letting it evaporate – and opted for the former. Based on past practice it is likely the government will accept the recommendation. 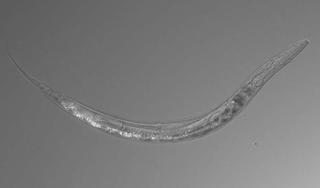 Mono Lake, located in the Eastern Sierras of California, is three times as salty as the ocean and has an alkaline pH of 10. Before this study, only two other species (other than bacteria and algae) were known to live in the lake—brine shrimp and diving flies. In this new work, the team discovered eight more species, all belonging to a class of microscopic worms called nematodes, thriving in and around Mono Lake. 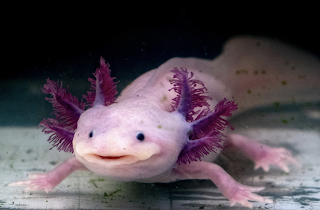 The axolotl salamander, with frilly gills and widely spaced eyes, looks like an alien and has powers of regeneration. Lose a limb, part of the heart or even a large portion of its brain? No problem: They grow back. “It regenerates almost anything after almost any injury that doesn’t kill it,” said Parker Flowers, postdoctoral associate in the lab of Craig Crews, the John C. Malone Professor of Molecular, Cellular, and Developmental Biology and professor of chemistry and pharmacology. 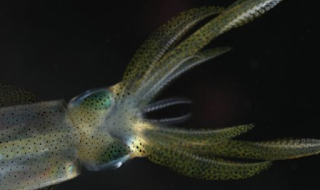 We are closer to understanding the incredible ability of squid to instantly camouflage themselves thanks to research from The University of Queensland.  Dr Wen-Sung Chung and Professor Justin Marshall, from UQ’s Brain Institute, completed an MRI-based mapping of the squid brain and developed an atlas of neural connections.
“This the first time modern technology has been used to explore the brain of this amazing animal, and we proposed 145 new connections and pathways, more than 60 percent of which are linked to the vision and motor systems,” Dr. Chung said.

Read more from “University of Queensland” 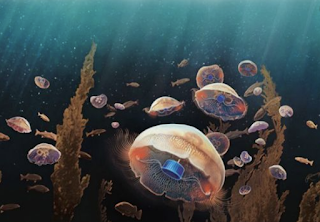 It may sound more like science fiction than science fact, but researchers have created bionic jellyfish by embedding microelectronics into these ubiquitous marine invertebrates with hopes to deploy them to monitor and explore the world’s oceans. A small prosthetic enabled the jellyfish to swim three times faster and more efficiently without causing any apparent stress to the animals, which have no brain, central nervous system or pain receptors, the researchers said.

Editorial: Not included in the article: will any jellyfish predators be harmed by ingesting these devices? 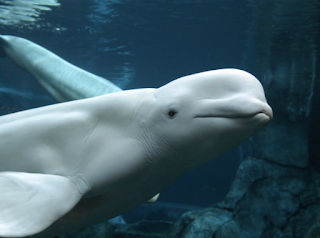 Two environmental groups on Friday issued a notice that they intend to sue the National Oceanic and Atmospheric Administration to void a permit allowing oil exploration in waters used by endangered Cook Inlet beluga whales. Earlier this week, NOAA’s National Marine Fisheries Service (NMFS) released a new population estimate showing the whales are fewer in number and declining faster than previously believed. According to the new estimate, only 279 beluga whales remain in Cook Inlet, the NMFS said on Tuesday. The population, which was about 1,300 in 1979, and has declined at an annual rate of 2.3 percent over the past decade, more than four times as fast as previously believed, NMFS said. 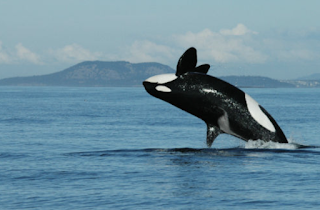 Post-menopausal killer whale grandmothers improve the chances of survival for their grand-calves, new research has found. The study found that grandmothers who were no longer able to reproduce had the biggest beneficial impact on the survival chances of their grand-offspring. This may be because grandmothers without calves of their own are free to focus time and resources on the latest generation, the researchers suggest. The research team also found that grandmothers had a particularly important role in times of food scarcity, as the impact on a calf of losing a post-menopausal grandmother was highest in years when salmon was scarce.

Read more from “University of York” 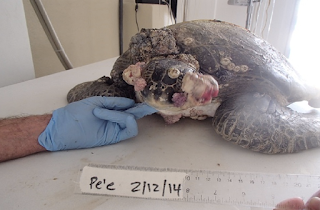 Fibropapillomatosis (FP) is a disease specific to sea turtles. The condition is characterized by benign, but ultimately debilitating, epithelial tumors on the surface of biological tissues. Affecting sea turtle populations worldwide, it is widespread in warmer climates like Florida, where almost 70 percent of sea turtles in a population have FP in some places; it has been documented in the Caribbean, South America, Hawaii, Japan, Australia, and beyond. The disease leads to the formation of tumors on the turtles’ eyes, flippers and internal organs, which often debilitate them by inhibiting feeding and movement, obscuring vision, and/or leading to organ failure. 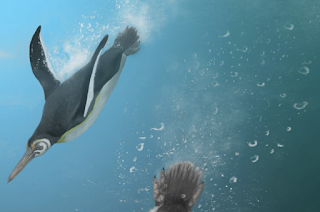 What waddled on land but swam quickly in subtropical seas more than 60 million years ago, after the dinosaurs were wiped out on sea and land? Fossil records show giant human-sized penguins zipped through Southern Hemisphere waters – alongside smaller forms, similar in size to some species that live in Antarctica today. Now the newly described Kupoupou stilwelli has been found on the geographically remote Chatham Islands in the southern Pacific near New Zealand’s South Island. It appears to be the oldest penguin known with proportions close to its modern relatives.

Read more from “Flinders University”
12. Ditch the delicate wash cycle to save our seas 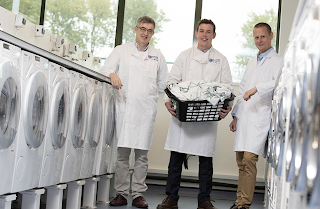 Millions of plastic microfibres are shed every time we wash clothes that contain materials such as nylon, polyester, and acrylic. Because these fibers are so small, they drain out of our washing machines and can ultimately enter the marine environment. Once in the ocean, they are ingested by the animals living there and two years ago Newcastle University scientists showed for the first time these fibers have now reached the deepest parts of our ocean.
New research led by Newcastle University has shown that it is the volume of water used during the wash cycle, rather than the spinning action of the washing machine, which is the key factor in the release of plastic microfibres from clothes. 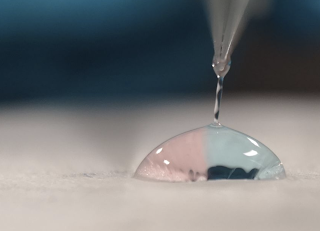 Researchers from Aalto University, the University of São Paulo and the University of British Columbia have found a way to make a new kind of fiber from a combination of chitin nanoparticles, extracted from residual blue crab shells and alginate, a compound found in seaweed. This new bio-based material is sturdy and has antimicrobial properties. The team studied how differences in the concentration of each component, the size of the nanoparticles, and other variables affect the mechanical properties and spinnability of the final thread. With this information, the researchers were able to produce strong, flexible threads continuously. 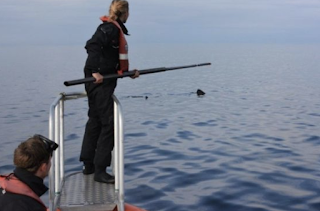 Basking sharks travel migratory routes in groups of extended family, a new study led by Scottish scientists has suggested. Large groups of the fish gather in the Irish Sea and Scotland’s Sea of the Hebrides from May to October to breed and feed on plankton. Research led by the University of Aberdeen used genetic profiles of individual animals. The scientists said it was possible the fish “hang out” with relatives. Genetic profiles were created from DNA extracted from swabs of skin mucus taken from basking sharks swimming close to the surface as they fed. The sampled sharks included fish found off Scotland and Ireland in summer months.

Read more from “BBC”
15. Microplastics from can ‘hide’ in deep sediments 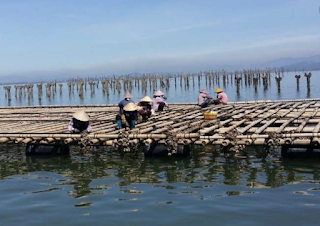 Microplastic pollution in the world’s oceans is a growing problem, and most studies of the issue have focused on land-based sources, such as discarded plastic bags or water bottles. Now, researchers reporting in ACS’ Environmental Science & Technology have linked microplastics in China’s Beibu Gulf with heavy fishing activities. Surprisingly, many of the particles were hidden in deep sediments on the ocean floor, which could have led scientists to underestimate the extent of the contamination.
Read more from “American Chemical Society”