1. Rare Megamouth Shark Caught off Japan
2. 5 Changes YOU Can Make to Help Protect the Ocean
3. Rare Goblin Shark Accidentally Captured
4. Around the World in a Canoe!
5. One in Three Fish Imported Into U.S. May Be Illegal

Fishermen off the coast of Japan hauled in an extremely rare megamouth shark recently, making it one of the only 58 specimens ever caught or seen by man. Megamouth sharks are docile filter-feeders with wide, blubbery mouths and are related to whale and basking sharks.

Considered one of the rarest fish in the world, megamouth have been been sighted in California, Japan, Taiwan, Indonesia, Brazil, Ecuador, Senegal, South Africa, Mexico and Australia. The last seen megamouth shark was accidently caught in the Philipines in 2009.

2. 5 Changes YOU Can Make to Help Protect the Ocean

In the face of pollution, overfishing and other daunting problems, each of us as individuals can  play a considerable role in conserving the vast ocean. Here are five changes you can make today to help make a positive difference in conserving the oceanic ecosystems:

1. Make better seafood choices.
2. Discard trash with care.
3. Be a responsible beach-goer this summer.
4. Be considerate of sea life habitats.
5. Get involved.

Catch the full article at the Sea Save Blog by clicking here.

Shrimp fisherman Carl Moore, 63, accidentally caught a rare goblin shark last month off the coast of Key West, Florida. Carl didn’t realize what he had caught when he saw the pink fish, estimated to be 15 feet long.
Goblin sharks are normally found at about 3,000 feet below the surface, and scientists are baffled as to why this one was found at only 600 feet. Goblin sharks date back to prehistoric times and are often referred to as a “living fossil.” The last goblin shark was sighted off the coast of Japan in 2007. Carl Moore released the animal after snapping a few photos of the unusal-looking creature.

4. Around the World in a Canoe!

Using nothing but traditional non-instrumental navigation techniques, members of the Polynesian Voyaging Society are embarking on a multi-year journey around the world on board Hawaii’s legendary “Hōkūle‘a canoe.”


Along the way, they will meet with diverse cultures to inspire them to connect with the natural world, their ancient ways, and with each other, spreading the lessons learned through the revival of this ancient skill that has helped revitalize Hawaiian culture.
The core message is “to mālama (care for) Island Earth” – our natural environment, our children, and all humankind.
Follow the adventure on this blog through the words and pictures of the crew members themselves on board the canoes and at port around the world. Learn more at hokulea.org.

5. One in Three Fish Imported Into U.S. May Be Illegal 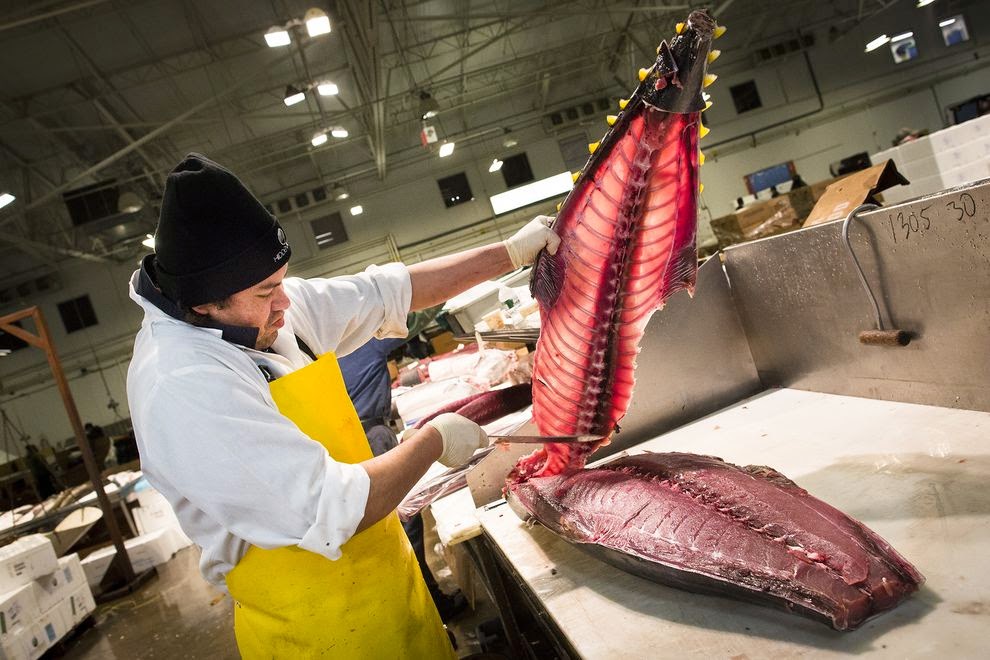 Scientists reported that tuna from Thailand had the highest rates of being caught illegally, followed by pollack and salmon from China, then tuna from the Philipines. Canada, Vietnam and Chile have less than 10% illegal catches.

Although the illegal fishing trade is hard to control due to the vastness of the ocean, countries are cracking down on pirates. South Korea led by example when they apprehended 10 illegal fishing vessels in 2011.
Original Articles
http://www.foxnews.com/world/2014/05/08/rare-megamouth-shark-caught-off-japan
http://its-your-ocean-news.seasave.org/2014/05/5-changes-you-can-make-to-help-protect.html
http://newswatch.nationalgeographic.com/2014/05/05/rare-goblin-shark-caught-in-gulf-of-mexico/
http://newswatch.nationalgeographic.com/2014/04/27/hokulea-the-crown-jewels-of-our-oceans
http://news.nationalgeographic.com/news/2014/04/140409-illegal-seafood-pirate-fishing-fisheries-marine-conservation
PrevPrevious5 Changes YOU can make to help Protect the Ocean
NextMaking Waves: Sea Save’s Week in Review – May 16, 2014Next
Facebook Twitter Instagram Linkedin Youtube