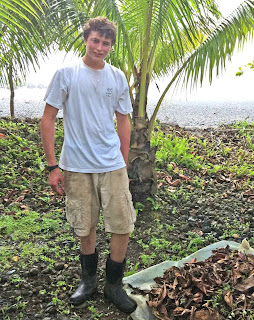 After completing all my university applications, I toyed with the idea of taking a year off from my traditional studies. I wanted to continue to grow, but outside the academic setting. I sent out a number of e-mails searching for options and invitations, and when I learned about Cocos Island, I was intrigued. An island 300 miles from any landmass, a historic pirate hideaway, with world-class diving and a unique biological niche: it sounded like a tropical paradise. As an avid biology student, I was excited at the thought of working in such a unique habitat. I imagined diving aquamarine waters surrounding the islands, hiking through the steamy rainforest, collecting data on the various species, monitoring the health of the ecosystem as a whole, and I was sold. I filed the paperwork, was accepted as a volunteer, bought the plane ticket, and began preparing for six weeks on one of the most remote places on earth.  After a flight to San Jose, a drive to Puntarenas, and 36 hours aboard the Undersea Hunter (where, as a park volunteer, I was asked to not “bother” the paying guests.) I arrived at Isla de Cocos.

As it turns out, I’m not diving the reefs or trekking over the island’s steep terrain, and there is none of my imagined data collection and ecosystem health monitoring. As a volunteer, my duties are much more quotidian. I’ve painted the shop floor, cleaned out a storage shed, helped the cooks in the kitchen, and done a good deal of landscaping work with a rake and machete. These tasks don’t require much in the way of thinking, and I’ve had plenty of time to reflect, build relationships with the funcionaires and other volunteers, and learn Spanish, poco á poco, as they say. The things that seemed all-encompassing to me in high school year have been put in perspective; all my college and career worries have simply melted away here on the island.

In Costa Rica, they have an expression, Pura Vida!, that used in any way possible. It’s meaning – directly translated – is Pure Life. But it means life’s good, no complaints, couldn’t be happier – like the Lion King’s infamous Hakuna Matata.  I’ve basked in the word, absorbed the Pura Vida! lifestyle like a sponge. It pervades the Cocos atmosphere. My companions here on the island are hard-working, jovial, and good-natured. And despite their busy days, they always have time to lend each other a hand, to tell a story or joke, or quiz me on my Spanish.

I’ve also gained a new outlook on conservation while here. Or, to more accurately describe it, a nagging suspicion that I’ve had about conservation philosophy has solidified into a conviction, a belief. And as much as it is a conservation belief, it’s more of a lifestyle belief: Each individual has a niche in the ecosystem surrounding them, each individual has a role to fulfill in that ecological niche. One of the rangers I work with, Guillermo, epitomizes what I’m talking about. When I first arrived, everyone told me that if I wanted to know more about the island, I should ask Guillermo, he knows more about the island than anyone. So I asked him questions in broken Spanish, talked with him about the island’s history and ecology, and I watched him work. I’ve watched him care for the island, watched him move through the space with respect and intention. He’s the quintessential steward, a keystone in the Cocos Island ecosystem around the station, maintaining a balance in the interactions between the human and natural world here in Wafer Bay.

Guillermo has found his niche, has committed himself to the stewardship of Cocos Island. But what I’m getting at, what I’ve discovered while I’m here, is this: I’ve got to find my own niche. We all have to find our own niches, to immerse ourselves in them, to care for them. As important as an education, a career, and success might seem, what is more important is the land on which we live. We need to act as stewards of the land, to facilitate, rather than impede, the growth and development of the ecosystem of which we are a part. I’m convinced that if everyone did so, the world would be a healthier place, a better place.