Cocos Island: Plenty of Patrols, Exhaustion, Frustration, but a Dearth of Justice 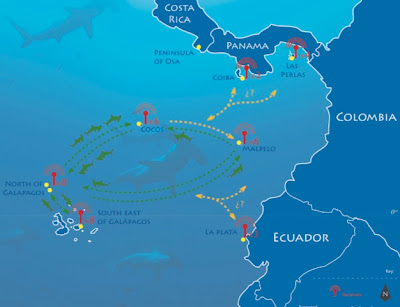 At 8:30, Guillermo, a park funcionario, Frank, Alonzo (two other volunteers), and I walked across the tidal flats to the small launch beached at the water’s edge by the low tide. After hauling it off the sand and into the surf, we motored out to the smaller of the two boats marked “Cocos Island”. Around 20 feet long, with a wheelhouse big enough for maybe three people maximum, and a three-step ladder down into a two-bunk cabin in the bow, complete with microwave, sink, and head (toilet) – it seemed ridiculous to patrol the waters of the mighty Pacific in such a boat. But the [much] larger patrol boat is currently without the proper registration papers, which are being processed in the bureaucracy of the Costa Rican government. So the rangers make do with this one.
After an oil addition, the engine roared to life, and we began the day’s patrol chugging out around the western head of the bay, heading south-west about a mile off the island’s coast. After passing the Dos Amigos, two prominent rock islets, we continued on our south-west course, veering south slightly, moving away from the island.
After about an hour on patrol, I spotted something some 50 yards to the starboard side of the patrol boat. Four buoys, painted gray, bobbing up and down among the waves. It took several pairs of eyes to confirm that the buoys were in fact there, for they blend in with the water, especially on a gray, rainy day like this one. The fishermen do this intentionally, to avoid detection of their lines.
Only when we had slowed to examine the bobbing objects to the starboard did we realize that we had in fact run over a line stretching several hundred yards along an east-west axis, not more than two miles from the island. Note that the Area de Conservacion Marina Isla Del Coco extends 12 miles out in all directions from Cocos Island. The line was well within the protected area – a gross violation. Hauled in hundreds of yards of line. A dozen buoys, painted a camouflage gray over there natural white and yellow. 44 hooks in total. Two Galapagos sharks and one ray ensnared. Dead.
Once the line was out of the water, and the hooks and buoys had been cut away, we set a southeast course. Around noon, something showed up on the radar that looked like a fishing boat, so we set a course for the red blip, and in the meantime, made ourselves ham and cheese sandwiches. By 1 pm, the boat was in sight. Out of Puntarenas, it was anchored in the rolling swells some nine miles from the island and appeared abandoned at first pass. Guillermo radioed for the captain, and after several tries, a head emerged from the fishing boat’s wheelhouse. “Registration number, fishing license number, name and age of everyone on board” (All in Spanish). “You are aware that you are in Marine Protection Area? I’m going to have to ask you to leave”. And that was it. The fishing boat hauled up its anchor and set off into the haze of rain, and we turned back towards Wafer Bay, with all the incriminating evidence necessary to pursue justice for this violator of Costa Rica’s conservation laws.
Only there’s a catch. This criminal boat will not be brought to justice. There’s no reason to believe that the fisherman won’t be back next week or next month. No fine will be imposed. No license will be suspended. No equipment will be confiscated. Though I don’t fully comprehend the system yet, this is what I do know, passed on to me by rangers and other volunteers: no matter how many “tickets” the rangers write, the fisherman will never be required to pay the fine. The park staff has the power to confiscate boats, and equipment from fisherman found within the protected area; but, they must deliver the confiscated goods to San Jose within 24 hours of the violation if they wish to impose a sentence. It’s 36 hours by boat to the Costa Rican mainland and another two hours at least from Puntarenas to San Jose. The laws are outdated and are made by fishermen and the friends of fishermen, according to one ranger here. The system is deeply flawed, but the park rangers don’t carry enough weight in the Costa Rican government to change it.
PrevPreviousCocos Island: “God, what a great planet”
NextCocos Update ~ The only thing that stays constant is changeNext
Facebook Twitter Instagram Linkedin Youtube