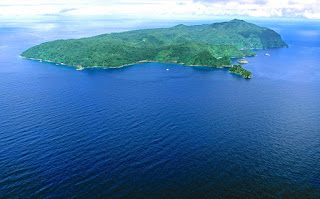 I’ve been re-assigned to patrol duty for the next couple of days. Maybe more, but things tend to operate on a day-to-day basis around here (for me anyways, with my limited Spanish) so I’m not entirely sure what the duration of my assignment is.

There was no patrol today, though, because the diesel supply is low, so I spent the day doing various odd tasks. Two of the three rubber launches were hauled out of the water, and I helped scrub them with bleach, soap, and water. I hunted around for six nuts and bolts all of similar size somewhere at the station (not as easy as it might sound, because all nuts and bolts of various sizes are compiled in used oil containers in various locations). These, to replace corroded ones on board Cocos Patrol 2 (the smaller patrol boat). I cleaned up the third and newest pavilion, still strewn with construction debris. It was a pretty low-key day. Plenty of time to think. Plenty of time to reflect.
I’ve been pondering perception and reality lately, the relationship between facts and bias, and this incident in particular: last week, while working on the “hook barrel” with Guillermo, a group of American tourists came over to examine the operation (the tourists who come to Cocos to dive usually get one afternoon during their trip to wander around the Wafer Bay Station). When they found out I was American, we began chatting it up. They asked me about poaching, and I told them about the lines pulled out of the water earlier last week, and about the boat, we had found anchored three miles within the 12-mile limit. I was corrected, informed that the limit used to be 12 miles, but it’s bigger now.
Curious to find out the truth, I asked patrol captain Guillermo Perez about the limits of the park as we were chasing the two fishing boats out of the park on Saturday evening’s patrol, and this is what I came up with: Currently, the limits of the park extend 12 miles in all directions from the island. Once the fishing boats are outside of the 12-mile limit, the funcionarios have no jurisdiction. There is, however, a law in the making that will substantially increase the protected area. Currently, the protected area is a little over 1000 kilometers squared; the extended area would cover over 11,000 kilometers squared.
From what I gathered from Guillermo, the bill has been written and is undergoing revision by a committee in the government that revises all Costa Rican laws before they are passed to ensure their constitutionality. Once the revision process is finished, the bill will be passed on to the Senate, where it will be voted upon, and then it will be passed on to the president, who must sign it into law. Guillermo couldn’t say when the law would finally be signed and take effect.

But this is simply my perception of the facts, as gained by my conversations with Guillermo, and there are probably certain flaws in my perception of the truth, just as the perception of the American tourists was flawed. The reality of the situation is probably more nuanced, more intricate and specific, and to get the truth I will have to go straight to the park director, or higher up in the governmental hierarchy, to the committee that is reviewing the bill and to the lawmakers that made it. I’ll have to go straight to the source, because – like the game of telephone, where one person whispers something to the next and the message gets passed around the circle, almost always ending with a bizarre distortion of the original – facts which tend to change ever so slightly as they radiate out from their source. So as I continue to discover more about Cocos Island and the issues relevant issues, I’ll have to keep this thought in mind: go to the source. Anything else is liable to be unreliable, as experience has proved.