Cocos Island: MarViva: When the Funding Runs Out 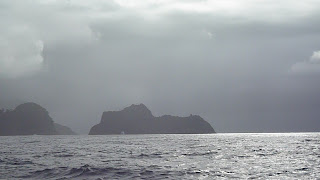 I sat bolt upright and seized my watch from next to the bed, terrified I’d missed the patrol boat scheduled to leave at three. I threw on my bathing suit and volunteer shirt, grabbed my rain jacket, and stumbled out of my room and down the stairs, to find Guillermo Perez, patrol captain, sitting on the bottom step, thoughtfully contemplating the darkness and the rain lightly drumming on the corrugated roof. I checked my watch: 2:35 am. Plenty of time. When Frank and Pablo emerged from their quarters, we took coffee in the stairwell with the moths, and no one was awake enough to make conversation.
By the time the coffee had kicked in and we had made ready to go to the boat, the rain was falling steadily. Captain G. Perez peered out into the darkness for several long moments, then told us to go back to bed, he was postponing the patrol to after breakfast in hopes that weather would clear up. So after the adrenaline jumpstart and the hot cup of coffee, I crawled back under my sheet for an attempt at three more hours of sleep.
After breakfast, the rain was still coming down hard, and so patrol was once again postponed, this time to 2 pm in the afternoon.
At two, five of us piled into Munegu, the A-15 inflatable launch with it’s 25 HP motor. We puttered out into Wafer Bay and boarded Cocos Patrol (fondly referred to as Cocosita). Captain Perez fired up the engine, Pablo cast off from the mooring, and we set a northbound course until we cleared Manuelita, then we veered due east. As we came out of from behind the shelter of the island, the wind out of the south picked up and so did the swell.
When I mentioned in an earlier patrol blog that we were riding in an eight-foot swell, I was lying. Until today, we’ve been patrolling in four to five-foot swells, and I’m just not enough of a salt-crusted sailor to know the difference. Today’s swells were eight to ten feet – big enough that the boat was swallowed entirely by valleys of gray water as it slid down into the wave-trough, big enough for me to realize just how small and insignificant Cocosita really is amidst the vast Pacific.
When the wave crests began to curl over and foam, about three miles off the island and an hour into patrol, Captain G. Perez made the call. We were going to head back to Wafer. Cocosita bucked up and down, back and forth in the waves, rendering the radar ineffective. And without the radar, patrolling more than 432 square miles of a protected area is a futile enterprise. 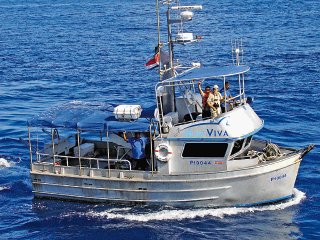 It was a frustrating day, that’s for sure. Patrol delayed twice due to weather, and then called off entirely because of the conditions. But the funcionarios can’t waste patrols in bad weather; they have to make each patrol count. Diesel is in very limited supply here, and the park can’t afford to squander it on days when the chances of finding a line or encountering a poaching boat are slim.
It’s not ideal, but it is the reality of the situation. With the staff and resources to run only one 6-8 hour patrol each day, the park has to make do. If conditions are bad, it’s better to save the diesel for a better day then to push on.
When I first arrived, there two daily patrols. An organization called MarViva had a patrol boat out here, and they would take one eight hour shift each day, and the park would take another. The “MarViva Foundation is a regional, nongovernmental, nonprofit, whose area of action is in selected areas of the Eastern Tropical Pacific. Its mission is to promote the conservation and sustainable use of marine and coastal resources, through support for Marine Spatial Ordering processes,” (www.marviva.net – with the help of Google Translator). One of its primary goals is the “support for management and control of Marine Protected Areas,”(www.marviva.net) – hence the patrol boat here.
Founded in 2002 by Erica Knie, the organization had been a presence at Cocos for eight years. However, a week after I arrived, MarViva was gone. The funding for the Cocos Patrol has run out, and Marviva IX (the patrol boat) and it’s captain have shipped back to the mainland. Rumor has it that there was a sole benefactor of the patrol boat, and she passed away recently. When she passed, the funding was cut off.
So now the park is back down to one patrol. Whereas before there was some enforcement authority in the water 16 hours out of each day, and it was more about being a presence, now the funcionarios have to pick and choose their window. With only eight hours every day, they have to find the time when they will be most effective when they will most likely encounter fisherman. And that means they are at the mercy of the elements, because patrol relies heavily on the radar, and radar is ineffective in bad weather.
When the wind picks up and the curtain of rain descends, our bow turns to Wafer, and the fishermen have all 432 square miles to themselves. And that’s a problem.