Voices outside the Casa de Voluntarios woke me up at 5:00 am this morning. This isn’t the first early rousing though; it happens once or twice a week. I’ve come to associate it with the arrival of new faces, and this morning was no exception to the rule. When I stumbled groggily down the stairs of the Casa and looked over towards the river landing, sure enough, there was the launch with the newcomers, along with several dozen crates of fresh produce and three coolers chock-full of meat. Resupply day – perfect timing. I arrived with the last supply load 14 days ago, and the daily salads have been slightly meager of late. 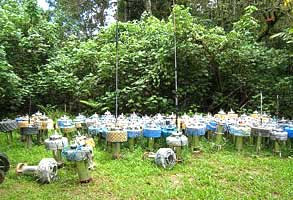 Breakfast was delayed as all hands were on deck carting the food delivery up to the kitchen in the pouring rain, and the day’s morning meeting didn’t start until eight. But the day eventually did kick into gear, and then it was back to sorting hooks and gastillas. We have moved on to the back-log: two and a half 50-gallon plastic oil drums filled with a rats-nest tangle of line, and rusty hooks. These barrels promise many days of work.
Today’s patrol motored in right before lunch (poor Daniella, one of the newer volunteers, had gone out and was unfortunate enough to be seasick the entire time), and the monotony of corroded, entangled line was broken as we spent the early afternoon sorting out the new line the patrol had hauled in.
As for the mystery of the enormous pile of line-filled sacks and the half dozen oil drums filled with metal gear pieces, I was able to find some answers. I spent the morning working with Jeido, another volunteer who has some broken English, and though he’s only a volunteer, I probed him for information about the confiscated fishing equipment. This is what I came up with:
Fact 1: The national park system is currently in court against the fishermen (and their friends and political allies).
Fact 2: The fishermen are claiming that they are setting their lines outside of the protected marine area, and that the Pacific currents are carrying them into the protected area around Cocos (This isn’t an entirely unjustifiable argument – the lines are strung out in the water along a line of buoys, and there is no anchor to prevent them from being carried by the currents)
Inference 1: The fishermen have sued the park (or some sort of legal equivalent) for confiscating their gear, and are claiming this seizure is unlawful because the lines were not technically placed illegally.
Fact 3: The confiscated gear is in fact just sitting there. The rangers can do nothing with it until the court case is decided. They are legally bound to keep it here, in case the fisherman win the court case and demand their equipment.
Inference 2: With no flow of materials, the rangers have no reason to stay on top of the organization of the confiscated gear. When there are ample volunteers, they can be put to work sorting. Hence the backlog that I’ll be working on for a while.
Surveying the above information, I was struck by this thought: there’s a limited amount of space here on the island, a limited storage capacity, and based on how things look, we’re closing in on the limit. What happens when there’s simply no place to put the confiscated equipment, and no court decision has been reached?
I have a conjecture, a conspiracy theory of sorts: what if it came to the point where the rangers simply could not do anything with the illegal lines? If things don’t look good for the fishermen in court (which they don’t – there is plenty of evidence documenting poaching), it would be in the fisherman’s best interest to stall the court – prevent them from reaching a decision, for as long as possible. It wouldn’t surprise me if they are intentionally trying to bury the case in the bureaucracy of the Costa Rican government. Because at some point, the island will reach its carrying capacity. And then the lines will float freely, the catch will increase, and so will the profits.
Just a thought, but still more investigating to do.
PrevPreviousCocos Island: Hooks and Gastillas: Part One
NextCocos Island: Hooks and Gastillas: Part ThreeNext
Facebook Twitter Instagram Linkedin Youtube