Hello, I am Lynda Whitbread and this is my first ever blog so apologies if it is not that good 🙂 However I wanted to write something about my Wave Rave weekend to thank all my family, friends and colleagues who supported and helped me, as well as those who took part in the various events here in Essex (UK), over the few days.

Though the Wave Rave officially was the weekend of August 25th & 26th, we managed to stretch the event a little longer. Firstly my brother in law Ian organised an exciting and successful charity quiz night in aid of Sea Save Foundation on Wednesday August 24th raising both awareness and donations for Sea Save. Well done Ian and a great start!

Friday August 24th continued with three separate events. Firstly, my wonderful colleagues in the Brentwood office dressed down for the day to raise more money for Sea Save and help get the message out that we must protect our oceans and the diverse marine life within them. At the same time, Ian’s colleagues also dressed down at his workplace with the same aim and conviction. Fantastic! 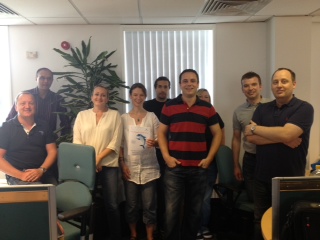 Brentwood staff dressed down for the Wave Rave 2012

However I had the hardest job of all.  I had to travel to Dublin and Wave Rave (Dublin style) with some of my amazing Irish colleagues.  Tough job I know, but someone had to do it!!!! After some important meetings and work during the day, my colleagues and I went for a very lovely Italian meal and of course, a few drinks.  During the evening, we all took part in a ‘making Ravioli’ competition and though I am a totally useless cook, I won and got a bottle of wine for my trouble!!!! To be honest I did have some help from two of my more food talented colleagues. Wave Raving in Dublin is an art and requires stamina, dancing and a lot  of FUN!!!! Luckily my flight home was Saturday afternoon so I was able to have a lie in. 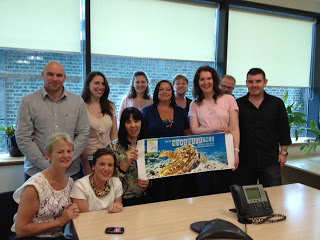 My Irish colleagues and I before we went out in Dublin! 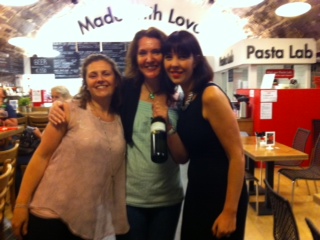 Winners – With my bottle of wine

This brings me nicely to Saturday August 25th. Whilst many wonderful people around the globe were hosting amazing events, and I was slowly making my way home, colleagues Carolyn Clark and Nicola Hewitt, together with their families and other co-workers went to see Peter Pan at the Palace theatre in Southend. Though the weather was very British (lots of rain!), they were very happy to stay afterwards and get a picture to promote Sea Save.  Well done all!

Sunday 26th August was then upon us and it was time for the Sea Save Foundation Wave Rave 2012 party at my house.  All the key elements were there; fabulous guests, food, music, dancing and yes, drink.  I think I may get a reputation here!!! The party was a lot of fun and raised yet more monies for Sea Save. Ocean awareness was key with photos of the beautiful marine animals, mixed with some less nice pictures to show what unfortunately is happening such as shark finning, were on a slide show throughout the event.  I also did a quick 5 minute talk about Sea Save and the need for ocean conservation. The Wave Rave 2012 video narrated by the very talented Erick Avari was also shown. A great night! A BIG thanks to my sister Donna, and brother in laws Ian and Tony for all their help in arranging the party! Thanks also to my two beautiful nieces for taking photos and filming the event.

Monday August 27th was a bank holiday here in the UK so provided a well-earned rest for many of us, including me!

Overall the Wave Rave weekend was a success in my neck of the woods, as it was across the globe.  A MASSIVE  thank you to everyone who hosted or participated in any way in the Wave Rave 2012.  Remember it’s your ocean; thank you for doing something about it!