How “Stuff” Gets to Cocos Island

Share on facebook
Share on twitter
Share on linkedin
Snapshot: My first morning at Cocos Island. Woke up at 5:00 am aboard the Undersea Hunter and something was different; the motor had stopped, and there was an unusual amount of activity – thumps, bumps, and voices. Climbed up the companionway from the crew’s quarters where I was stowed and looked curiously out the window of the main salon (view partially obscured by rainwater streaming over the porthole glass) at a steep, emerald green shore rising up out of gray water under a leaden sky. An unfamiliar man wearing an army green rain poncho was occupied passing plastic crates down to a rubber launch tied to Undersea Hunter’s starboard side.
The cook stepped out of the galley and said something in Spanish (at this point my Spanish was limited to Buenos dias, gracias, and the words for breakfast, lunch, and dinner), pointing urgently back down the companionway at my bag, and then to the boat tied up alongside. I got the gist: Time to go. I donned my raincoat, pushed my overweight pack up the ladder into the main cabin, pulled myself up after it, then shouldered my pack and stepped out into the rain.
Two more rangers were in the boat were busily arranging the crates, filled with vegetables. I was put up front, on top of the meat coolers. My pack went below the lettuce. Just another item on the morning’s delivery list – that’s what I felt like, unable to understand a word of the conversation going on around me. Fragile. Handle with Care. This Side Up. I sat in the bow of the dinghy, thinking: what have I gotten myself into?
With the shipment loaded and the new volunteer on board, the rangers cast off and motored across Chatham Bay, through the Challe Straight between Agujas Point and the enormous hulk that is Manuelita. The rain stopped, and I could see early-morning blue sky through a tattered hole temporarily ripped in the cloud-ceiling. Hundreds of magnificent frigatebirds and red-footed boobies soared overhead, as we passed through Weston Bay and rounded Presidio Point, entering into Wafer Bay. We motored towards the beach and as the coconut palms came into focus, a river mouth appeared and we made for it, nudging up into the sand of Wafer’s riverside landing, and then a swarm of people descended on the boat, hauling crates to the waiting tractor and trailer, and Esteban led me to the Casa de Voluntarios and showed me to my room and then left me alone with the words: “Breakfast is at 6:30.” 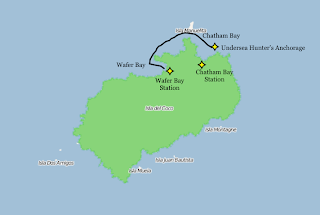 The route from Undersea’s anchorage to Wafer Bay
Everybody and everything that arrives here on the island – funcionarios, volunteers, vegetables, frozen meat, gasoline, lightbulbs, and trash bags – shares the same experience. This is how it goes: when anything needs to get to Cocos Island, it must first travel to Puntarenas, one of Costa Rica’s main Pacific ports, located in the Gulf of Nicoya. In Puntarenas, said person or object is loaded onto one of the tourist boats that bring divers to the island for week-long trips. The Undersea Hunter Group runs the most trips out to the island, and so their boats are the ones most often used. After 36 hours and over 300 miles in the Pacific, the boat arrives in Chatham Bay. Early in the morning, usually between 5:00 and 5:30 am, a group of rangers will take the Mobula from the Wafer Bay Station over to Chatham, where they will pick up person, produce, or supplies. On mornings with large deliveries, the rangers take Megaptera (an old, battered police boat for hunting down drug runners) because of its much larger platform. 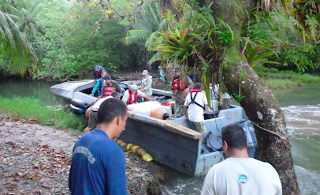 A large provision re-supply arrives in Megaptera
People come and go on a weekly basis. Hardly a diving boat arrives without a new volunteer or funcionario. When they arrive on the island in the early morning, they are escorted to their quarters by a funcionario. They’re told “breakfast is at six-thirty, the morning meeting an hour later,” and by the end of the day, they’ve blended right in. 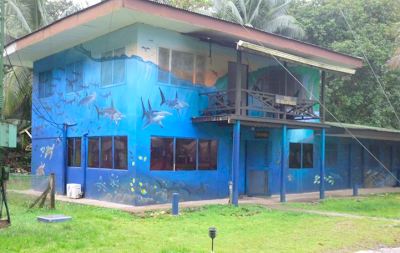 Volunteers are stowed in the “Casa”, which occupies the second floor of this brilliantly painted building (Office, Infirmary, Dive Room, and Guardacosta’s quarters occupy the first floor)

Provisions – fresh fruit and vegetables, meat, canned and dried goods – are shipped out roughly every two weeks. The morning of a food delivery is a hectic affair. The whole station is roused by 5:45 and told to be down at the river. When the “supply boat” pulls alongside the bank, the horde descends, forming a human train to transfer the crates and boxes from the boat to the waiting trailer. The tractor and trailer drive the several hundred yards up to the river, and then the train forms again to off-load the trailer, delivering the food to the porch just outside the kitchen. All this before breakfast – a good way to work up an appetite. Station supplies and tools, (such as the wire cutters sent out several weeks ago) arrive with the shipments of food. The trailer all loaded up

Gasoline and diesel arrive in 2-3 week intervals. Gasoline is transferred in 60-gallon, plastic drums to the Megaptera, which transports the drums to Wafer. From the Megaptera’s parking spot in the mouth of the River Genio, the gasoline drums are transferred to the lower bodega’s pumping station. Diesel never actually makes it to the island; it is transferred from the diving boats directly to the patrol boat. The patrol boat holds 300 gallons in its two tanks on board, and an additional 120 gallons are held in drums that are strapped to the deck.
And that’s how “stuff” gets to the island. No need to do a whole new post on how “stuff” leaves the island; the only things that leave the island are trash, recycling, funcionarios, and volunteers. Late in the afternoon of the departure day, the “outgoing mail” is loaded up into the Mobula and sent out to the departing diving boat. 36 hours and 300 miles later, the diving boat arrives back in Puntarenas. Trash and recycling are disposed of, and volunteers and funcionarios go on their merry way.
Also in the Cocos Island News today: The “Albatross” and “Chaday I” were caught within the park by today’s patrol. That’s the second time this week they’ve been caught. Grand Totals for 2011: Albatross – 19 violations. Chaday I – 13 violations.
PrevPreviousRanger Profile: Roberto Cubero – Tourist Watch
NextRanger Profile: Filander Avila Calderon – What’s Cooking?Next
Facebook Twitter Instagram Linkedin Youtube