Do the Australian fires impact the ocean? You bet they do. 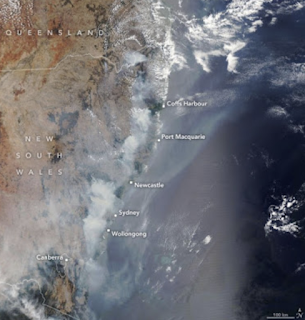 The enormity of the catastrophic fires currently ravaging Australia is hard to comprehend. Millions of acres of wilderness have succumbed to the flames in an extraordinary combination of factors that include severe weather conditions (drought, winds), human criminal activity (a number of fires have, allegedly, been deliberately set), and the more present than ever specter of climate change aggravating the conditions. Entire towns have been destroyed and millions of people in cities are being exposed to choking and unbreathable air.
So far, over 18 million acres of wilderness have been affected by fire, including national parks and other protected areas. The tragic loss of life is unimaginable; already at least 24 people and over one billion mammals, birds, and reptiles have died (according to the January 8th estimate by University of Sydney ecologist Chris Dickman.)
New Zealand’s National Institute of Water and Atmospheric Research (NIWA) reported that the westerly Southern Ocean jet wind stream—between Antarctica and Australia—has changed “dramatically,” with resultant “calmer, drier conditions.” The higher than normal ocean temperatures also mean that drought conditions and low precipitation are likely to continue for months. The pervasive and massive plumes of smoke are affecting New Zealand and South America already. The resulting ash fallout and smoke can dramatically impact the water chemistry of streams, rivers, lakes, and the ocean, affecting marine wildlife. Whales, dolphins, and other marine air-breathing animals can also be affected directly by the smoke.
This is a critical event, but what does it mean for marine life? It is hard to measure the impact of climate change underwater, in a realm we can’t see.  But on land, where fires rage, we can’t ignore the impact. There is no getting away from the fact that the world is changing around us and will impact everything. But how does this affect oceans?
Australia is already one of the most climate-impacted marine regions, with well-documented coral die-offs. But the fires are also part of a much bigger, global story, that certainly affects our fresh waterways and our oceans.
We have passed a tipping point where every change is driving more changes. An increase of Carbon in the atmosphere, largely due to human activities, is part of the problem with the warming climate and resulting fires. The hotter it gets the more fires there are, and the more fires, the more carbon from burning trees is released into the atmosphere. So the fires are feeding the trend.
But not only is the excess carbon bad for the climate, but it is also dissolving into the oceans, where it becomes carbonic acid, which gradually increases the acidity of the sea, making it hard for plankton and juvenile shellfish to form their calcium shells. These animals are the base of the entire ocean food chain. Anything that affects them will impact all marine life.
Our carbon-based planet is as fragile as it is robust.  We have seen nature recover from man-made insults for generations, but we must realize that our actions are culminating to a point where one day, we may no longer be able to right this ship.
What can you do?
Stay informed – read, learn how to vet reliable news sources and be an ambassador to facts and science.
Emergency Assistance –  Addressing the immediate needs of people and wildlife is perhaps the first step. According to a report on CNN, donations can be made to several organizations working toward victim relief and recovery, including the Australian Red Cross, Salvation Army Australia, the NSW Rural Fire Service, and the St. Vincent de Paul Society Australia.
You can also help the devastated animal population by giving to wildlife rescue and treatment groups like WIRES, the Port Macquarie Koala Hospital, and Currumbin Wildlife Hospital.
Make Change – Reversing climate change is a marathon, not a sprint. Consider changing your habits to include the following:  Only use sustainable or recycled wood and paper and eat less beef – easing the pressure on the world’s forests, and trying to reduce your energy consumption so fewer fossil fuels are burnt. Our best bet in calming the climate crisis is trees – trees absorb carbon dioxide from the atmosphere and lock the carbon away in their cellular structure.
Currently, we are cutting or burning trees, releasing the carbon back into the air, and lessening the ability of forests to absorb carbon when we should be protecting forests and replanting trees as quickly as we can to try and turn the tide.
Vote – Make sure you “Seas the Vote”, be part of the decision-making process and elect people who will support sound climate policy.
Compiled by Carlos de la Rosa Ph.D., Phil Coles, Georgienne Bradley M.A. 08 January 2020
Image Above ©NASA EOSDIS
NASA’s Aqua satellite used its Moderate Resolution Imaging Spectroradiometer to capture this view of wildfires raging on Australia’s eastern coast on Dec. 9, 2019. The wildfires were fueled by unusually hot weather and a potent drought that primed the region in October 2019, according to the space agency.
PrevPreviousStop Offshore Oil Drilling
NextSea Save Foundation “Ocean Week in Review” January 10, 2020: We Gather News; You Stay InformedNext
Facebook Twitter Instagram Linkedin Youtube