This video shows the work in progress. The scene captures the excitement and beauty of a cleaning station.  The Cocos adrenaline rush is a product of a 360 degree awareness of everything happening. Large schools, cleaning stations, macro, pelagics, currents…  Carlos has captured both the beauty and excitement that is Cocos Island.

Carlos Hiller is a man of restless energy,  and an unrelenting drive to get things done. It is apparent in the undertones of his soft voice, the steady of his piercing blue eyes, but most of all it can be seen in his art.
“I have two passions: art and the ocean. The majority of my art – all but three pieces, I think – are depictions, interpretations of the sea. It wasn´t one that came before the other, either. My love for the ocean has always manifested itself in my artwork, and my love for creating, for painting and sculpting, has always found a subject in the ocean.
I do a lot of education work, too. I take my two passions to schools in coastal communities, and try to generate an interest in the ocean, try to create a passion for the marine world. I go to these schools, and paint a mural of a marine scene. To get the kids involved, what I usually do is paint the background, the marine landscape, and a shark, or a whale, something big. And then I paint the outlines of a school of fish, and all of the kids get to paint these fish. And to accompany the mural painting event, we do educational workshops. We teach the kids marine biology, and the importance of marine conservation. 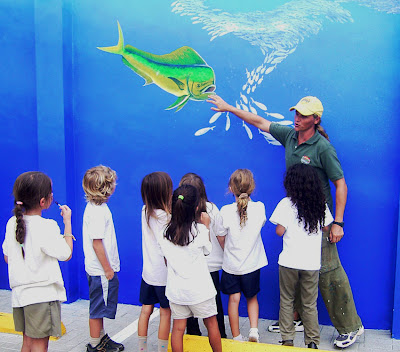 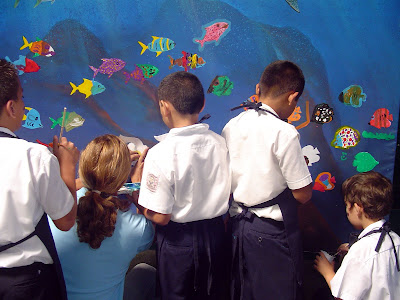 The students fill in the blank fish with their own artwork 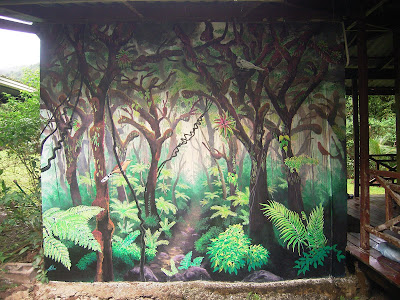 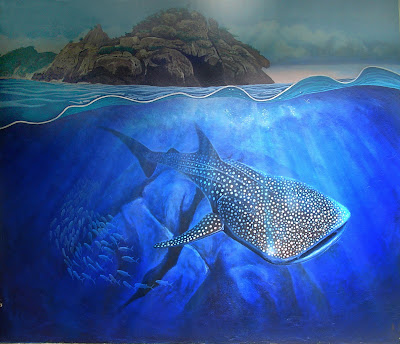 We focus our energy on coastal communities, fishing communities, where fishing is as much a way of life as it is a source of income, where the same fishing methods have been used for decades. I focus my education and outreach efforts on these communities to create a genuine love for marine life in the next generation, in the youth of these towns. If we can reach the next generation, we can break the cycle of harmful fishing practices handed down from generation to generation. We can turn these communities into part of the solution, not part of the problem.”
“Apart from my education efforts, I also donate a mural to a poor, coastal community in Costa Rica every year. I´m just trying to get the ocean in the eyes of the people, trying to show them that it is so much more than a flat horizon line, waves against the beach, a source of food. I´m trying to show the world just how beautiful and complex the underwater ecosystems are, trying to raise awareness, generate interest. At the very least, I feel like I´m doing something to better the poor communities in Costa Rica, making the spaces within those communities beautiful. But I think it has a larger impact than that. I hope it does. 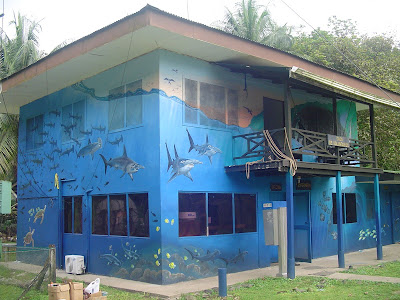 Last year, I also donated the murals at Wafer Bay, the one of the whale shark and the cloud forest up in the main complex, and the underwater scene along the north and west walls of the Casa de Voluntarios.
That was one trip to Cocos Island. Counting this last one, there have been two others. This most recent one was primarily a diving trip. I took a lot of pictures, soaked up the experience. I plan on using the material from this trip for future paintings.
PrevPreviousFillmore – A Special Grean Sea Turtle Visiting Cocos Island
NextSea Save continues scientific research in Cocos IslandNext
Facebook Twitter Instagram Linkedin Youtube